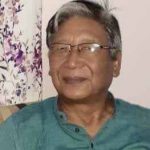 To refute Kalapani as the source of the river Kali is also political cussedness on the part of Nepal as this river and its source areas have always been known as Kalinadi and Kalapani, respectively. Indian villagers from Gunji and Garbyang have been cultivating the lands at Kalapani and this place also serves as their warehouses to stock goods for trading with Tibet. Kalapani is an important halting station for the Indian traders travelling to Tibet. Kalapani has also been sacred to the inhabitants of Vyas Valley (Byans Patti) of Dharchula Sub Division, who have been depositing the ashes of their dear departed ones to rest at the source of Kalinadi, and the confluence of Kalinadi and Kuti Yangti river is also sacred to them because of the sanctity lent to it by Kalinadi. The ancient Vyas Temple dedicated to the great Sage Vyas also stands near this confluence. The legendary Vyas Gufa believed to be the winter abode of Vyas Rishi is also situated near Kalpani. Compared to that, the river now claimed by Nepal as Kalinadi has always been known to the local inhabitants as Kuti Yangti, which has never been sacred to them. Yangti in the local Runglwo language means a river. Kuti Yangti is thus a river with no religious significance to the local population. It is but a bigger yet a tributary of lesser significance than Kali Nadi.

The entire area known as Vyas Valley came under the Nepalese sway in 1790 when the Gorkhas overran Kumaon defeating the last Chand King. Prior to that, the marauders from Jumla in Nepal and the bandits from Tibet used to come and raid and loot the hapless Rung population of Vyas Valley and in one such depredation, the Jumalis had killed the headman (Buda) of village Gunji and had fled away to Kangwa across River Kali. By the time this murder had come to light the next morning, they had fled from there also and the heinous crime remained unavenged and even to this day the act of avenging the murder of their Buda is enacted by ritually beheading the flour-dough effigy of the chief of the Jumali marauders (known as Jumali Hya) by the inhabitants of Gunji at the interval of every 12 years. This ritual is known as Jumali Hya Samo, which means decimating the Chief of the Jumalis. Despite these marauders causing periodic depredations in the Vyas Valley, these bandits were never recognised as rulers and the inhabitants of Gunji, Nabi and Kuti have no racial or historical memory of ever having been ruled by the Jumalis of Nepal. Contrary to that, the depredations, cruelties and misrule by Gorkhas are remembered as Gurkhel by people of the Rung region, as is also done by the people of the rest of Kumaon and Garhwal.

It was a good riddance when the British took over the territory after defeating the Gorkhas following which the Treaty of Sugauli was signed between Nepal and the East India Company in 1816. When the terms of this treaty were finally implemented on the ground, the two Rung villages of Chhangru and Tinkar east of Kali river were restored to Nepal in the spirit of the Treaty, and Kalinadi originating from Kalapani became the final boundary line between India and Nepal. The entire territory west of Kalinadi (Mahakali in Nepal) has always been part of India for thousands of years and the Treaty of Sugauli only reconfirmed this historical position. Thus the areas lying west of Kalinadi including Kalapani, Lipulekh and Limpiyadhura and the villages of Gunji, Nabi and Kuti are an integral part of India.

The Tawaghat–Lipulekh road connecting with India’s China border had been under construction for over 3 decades and it was finally inaugurated and opened for vehicular traffic on 8 May, 2020, by the Defence Minister Rajnath Singh. But, before that, this road/track had been used by the Indian piligrims to Kailash Mansarovar and the Indian traders to Taklakot and Darchin marts for thousands of years. It was as late as CE 1670 that the Chand ruler, Baz Bahadur Chand, had to lead a small military expedition to Tibet to secure the Indian interests and the route of trade and pilgrimage through Lipulekh. The International Border at the Lipulekh Pass is thus our undisputed international boundary with China. Nepal has no locus standi or any strategic interest in the area west of Kalinadi. Hence, the latest unprovoked and uncalled for act of amending the international boundary on the map is nothing short of perfidy committed at the instance of a third country. It seems to be a part of a bigger and more sinister design of encircling India by inimical neighbours. But Nepal can never be our enemy nor would the vast majority of Nepalese citizens ever permit it to be one as we have centuries old cultural, religious and people to people relationship with them. The 1800 odd kilometres open and peaceful border between the two countries is testimony to that.

But we cannot afford to let our guard down at this part of the Indo-Nepal border. Nepal has recently stationed its Armed Police Force at Chhangru Village very close to Kalapani. The Nepalese PM has threatened to ‘recapture’ the territory, if necessary, by use of ‘force’. In such a scenario, some misadventure by the Nepalese Government cannot be ruled out. India has firmly and categorically rejected the fictitious and ill-conceived Nepalese claims. But a leadership, out to stir up anti-India sentiments to bolster its own political survival and also being instigated and encouraged by an external power, cannot be fully trusted to act with prudence and friendliness. Yet, India has to handle the situation with utmost vigilance, tact and firmness. The Nepalese claim to our territory, howsoever fictitious, cannot be treated lightly and a degree of diplomatic dexterity, preparedness and firmness would be called for. Let no one entertain the illusions of capturing our territory.