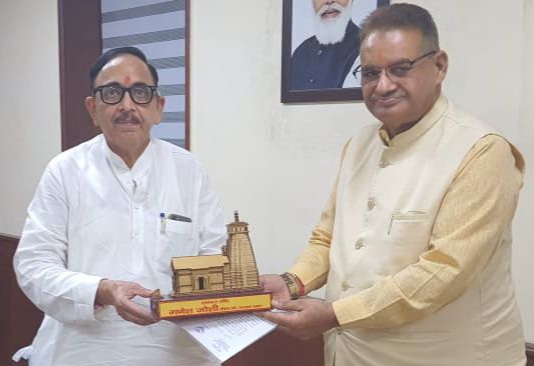 DEHRADUN, 9 Oct: State’s Industrial Development and MSME Minister Ganesh Joshi met Heavy Industries Minister, Mahendra Nath Pandey, in Delhi on Friday and sought necessary cooperation for setting up of Inland Container Depot (ICD) at SIDCUL Industrial Estate, Haridwar. On this demand made by the Industrial Development Minister, the Union Minister promised full cooperation. Industrial Development Minister Ganesh Joshi said that he had a very positive meeting with the Minister of Heavy Industries, Government of India, Mahendra Nath Pandey. The Union Minister seemed ready to cooperate in every possibility of industrial development in Uttarakhand. Joshi said that he had informed Pandey that Haridwar had been established as a big industrial centre. Industrial units of reputed companies based in Automobile, Pharma, FMCG, Engineering, Packaging and Agro were operating from there. Uttarakhand was a land-locked Odisha Police seized 10 kg of brown sugar this year BHUBANESWAR, 9 Oct (IANS): The Commissionerate of Police in Odisha has seized about 10 kg of brown sugar during the first 10 month (till Saturday) of the current year, 2021, said a police officer on Saturday. “We have seized more than 10 kg of brown sugar till today in 2021. In Bhubaneswar urban district 5.66 kg of brown sugar was seized while 4.646 gm of the contraband was seized in Cuttack,” said Police Commissioner Saumendra Priyadarshi. At least 33 cases related to the crime have been registered and 67 persons were arrested in Bhubaneswar. In Cuttack, 11 cases have been registered and 30 persons were arrested so far, he said. The seizure of the contraband made by the Commissionerate of Police is the highest in any police district of Odisha in one year. Last year 34 kg of brown sugar was seized in the entire State, he said. In Bhubaneswar, under Operation White Spider which was launched on August 15, 2021, total 37 drug peddlers have been arrested and 1.75 kg of brown sugar seized, the Police Commissioner said. Speaking about Saturday’s state and due to high logistic cost, the biggest challenge before the state was to increase exports. Two inland container depots were established in the state at Pantnagar and Kashipur under Kumaon division. The state government was trying to establish an inland container depot at Haridwar for the last several years. For this, it had been proposed to set up ICD jointly by BHEL and CONCOR on the vacant 35 acres of land at BHEL Haridwar and the transfer of land would have be approved by the Ministry of Heavy Industries, Government of India. On behalf of the state of Uttarakhand, in the past also, a request had been made to the Ministry of Commerce, Government of India regarding the above matter. But no progress had been made on this subject so far. Joshi had urged the Union Minister for an early action towards establishment of Inland Container Depot at Haridwar. Pandey had assured all possible help. Industries Minister Ganesh Joshi also presented a replica of Baba Kedar to the Union Industries Minister.

Garhwal Post has established itself as a credible, balanced and forward looking newspaper in India. Based in Uttarakhand, the daily is read by the aware, socially and culturally responsible, high-income elite of society.
Contact us: info@garhwalpost.in
lincolnshire dating site meetup charleston https://garhwalpost.in/asian-dating-website-canada/