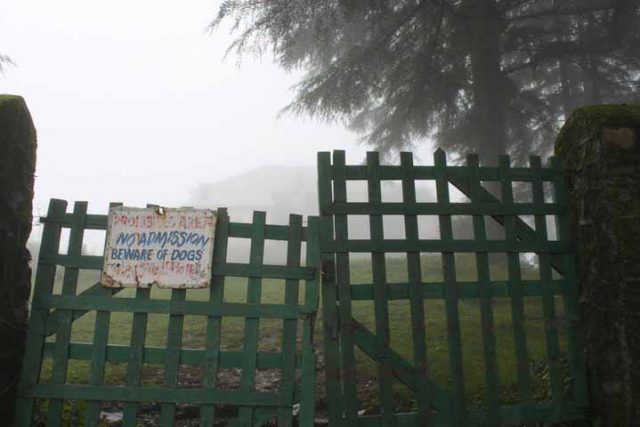 One of the charms of spending time growing up in Mussoorie is the opportunity to let your imagination run wild; for the senses to be tingled after darkness falls. It helps to have the fortune of living on physically the last estate at one end of Landour, beyond which the low range of Himalayan hills roll like ocean waves as far as the eyes can see, banking on every side, mounting up, pile on pile, at times during the monsoon casting optical illusions. 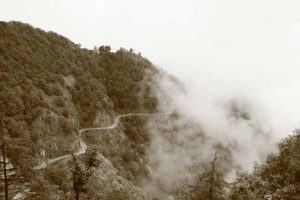 It is on one such summit that sits The Haunted House. How the dilapidated old structure – where the Amir of Afghanistan was kept hostage in 1839 during the Anglo-Afghan war – got this name is straightforward: it looks desolate and haunted from a mile away, a ramshackle oasis jutting out at one sharp corner of the aforementioned. When you factor in that nobody has lived there for over a century, and that whatever construction or renovation that has been attempted since have all fallen foul on some misfortune, the impression of something sinister builds. Since the turn of the century, one chawkidar has been found dead there, which of course adds to the legend of The Haunted House; never mind that the axe murder was done out of a jealous rage by a neighboring villager. 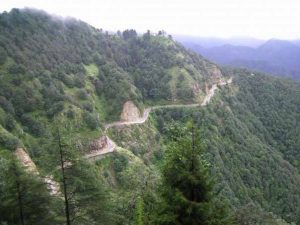 Adding spice to the whole story are generous sprinklings of other chawkidars refusing to stay there because of supernatural sightings and a tall tale about a couple that inhabited the old bungalow and one day disappeared.

Growing up in Landour, we went to this spot for daytime picnics, as family and friends. We played hide-and-seek there, and chor-police, and ate egg salad sandwiches and drank cold juice from icy thermoses. Every visitor from out of town was taken here at least once, to show them one of the famous ‘haunts’ of us Mussoorie-wallas.

And then, as childhood gave way to teenage angst, a few of us dared to venture out to the peak between Jabarkhet and Baataghat at night. Once, after 10pm, a fellow boarder and I slipped out of the school hostel and met a day scholar classmate at South Hill, the second last residential property of Woodstock School – which is also directly underneath our family estate, Oakville – on Tehri Road. With one torch between us, we walked on Tehri Road past Jaberkhet and up the slope to where the path to The Haunted House veers right off the tarred motorable strip onto a gravel-and-earth path.

We walked briskly, lowering our voices for no apparent reason, for the 700-odd meters of the path that stretched, dark and lonely, and occasionally twisted through the woods.

And then, out of the thicket, we rounded the last corner and saw, illuminated against the moonlit sky, the house. We walked up to the derelict wooden gate that wore a dull, moss-coloured green look, no doubt remnants of many a monsoon. We climbed over the gate and landed on coarse ground. To our left, memory told me that there were still decrepit spaces on the ground where once flowers would have bloomed but now weeds tightened their hold on rocks and chipped stone, stretching their roots over the soil and leaving the garden bed a mess.

We paused momentarily to look at the big house before us, scanning the flashlight’s stream through the mist to reveal broken windows and charred walls. Then we proceeded out to the back of the house, where a small field lay in wait. A cigarette was lit and passed around, our juvenile coughs interrupting the silence of the night.

Then we mustered the courage to go into the bungalow, for the first time. We lifted one of the loose wooden bars across a window and contorted our bodies to somehow squeeze in. We entered into what seemed a study, and to our right was a dining room, with a burnt table in the middle. We shone the flashlight across the orange-grey walls and saw scribblings in chalk and burnt wood by other miscreants before us. Off the dining room, a door led into a pitch-black room. None of us had the courage to venture further.

And then, almost as one, we decided we had seen enough. A chill running down our backs, we jostled each other to squeeze through that narrow window and as soon as our feet hit the veranda we ran towards the gate and didn’t look back once.

It is on such memories that I today look back on my Mussoorie years and chuckle. I would not have swapped it for anything. But would I now, more than two decades later, venture out past Jabarkhet after sundown with a just torch in hand? I think not.