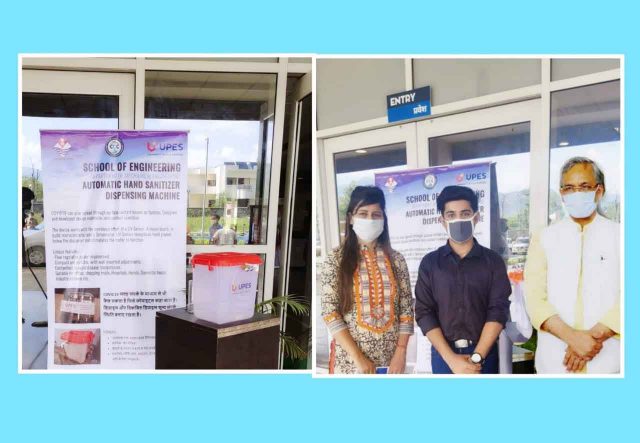 DEHRADUN, 5 Jul: The Faculty and Students of UPES continue to work towards mitigating the numerous challenges thrown up by the ongoing pandemic which have pushed human life towards a new normal way of living. Social distancing, wearing of face masks and intermittent sanitisation of hands have already become the new way of life, and will continue to be the new normal for long times to come. During the quarantine period, students and faculty teams in UPES have worked on various interventions towards developing effective devices which have become mandatory.
A student-faculty team of the Mechanical Engineering Department in UPES has developed a touch less sanitiser dispensing unit. Uday Veer Mittal, pursuing his BTech in Mechatronics at UPES under the guidance of faculty mentors Geetanjali Raghav and Dr Ajay Kumar has developed an “Intelligent Sanitiser Dispenser” which operates without human touch.
The working proto type has been installed at the Covid Care Centre near the Maharana Pratap Sports College, Raipur. Chief Minister Trivendra Singh Rawat, during a recent visit to the Centre, witnessed a live demonstration of the dispenser and appreciated the concept. Applauding the efforts of the team, he encouraged them to take it to the next step of commercialising it. Uday Veer shared, on the occasion, that during the earlier part of the lockdown period, he saw the need to have contactless sanitiser dispensing units at public places and was encouraged by his mentors to work on it.
Geetanjali Raghav disclosed that an ultrasonic sensor had been used in this unit. The moment it detects the presence of human hands, it dispenses the pre-set volume of sanitiser. The two salient features of this unit included regulating provision of the amount of sanitiser to be dispensed for a single use and a battery back-up provision in the event of electricity failure.
Dr Ajay Kumar added that the laboratory scale model had a capacity of carrying one litre dispenser, but keeping in mind the objective of deploying dispenser at public places for mass consumption, the sanitiser carrying capacity was increased to five litres while developing the proto type. Dr Kamal Bansal, Dean, School of Engineering, revealed that the cost of the proto type was Rs 2000 and could be further reduced in commercial production.
Dr Sunil Rai, Vice Chancellor of UPES, disclosed that this kind of contactless sanitiser dispensing unit would be extremely useful for establishments as they begin the unlocking operations in the coming days. The beneficiaries could include Offices, Restaurants, Banks, Shopping complexes, Residential Complexes Educational Institutes, etc.
Arun Dhand, Senior Director, added that the Incubation Centre in UPES would shortly establish interface with Industry to scout for partners to take up commercial production of the “Intelligent Sanitiser Dispenser”.