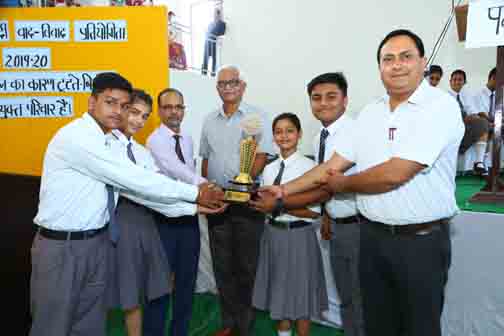 Dehradun, 28 Aug: The Inter House Hindi Debate was conducted at Cambrian Hall here, today, with grand fanfare. Principal Dr SC Biala presided over the function and gave away the book prizes, certificates and the trophy. The jury comprised S Bisht, R Dwivedi and Beena Shukla.
The debate had two rounds – one for the Juniors and the other for the Seniors. The topic for the Juniors was ‘Yuva peedi ki bhatkan ka kaaran tootatey bikhartye sanyukta parivar hain’. The young debaters expressed their opinion on the topic very forcefully and could convince the audience with their logic.
The topic for the seniors was ‘Ati mahatvakansha manushya ko samvedanheen nahin bana rahi hai’.
The Principal was highly appreciative of the way the debate was organised. He also commended the speakers.
In Group A, Juniors, Prachi Jhinkwan was first, followed by Priyanshi Thapliyal, Gautam Anand, and Shivam Mendiratta. In Group B, Seniors, Anavil Nautiyal was first, followed by Simran Kaur, and Chahak Jain.
Judha House was first, followed by Mainwaring House, Doutre House,
Edwards House and Shashi House.