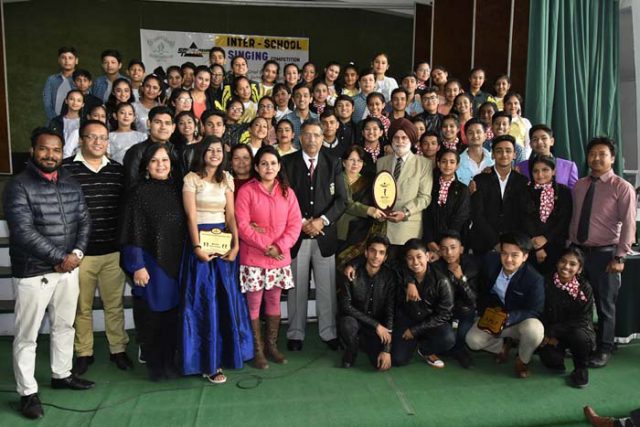 The topic under fire was ‘Gents are considered to be better teachers than the ladies’, and the topic was given to the schools one day before to prepare. A “Turn Coat” round was also held where one student per school was permitted to speak and present his/herviews on the topic selected through a random chit picked by the speakers. The speakers spoke for one minute in favour of the motion and the stroke of the bell immediately ‘Turned Coat’, i.e. start speaking against the motion.

On the second day of the ongoing Spectrumprogramme the singing competition was conducted with great enthusiasm and zeal by the students. There were three categories i.e.English Solo Singing, Hindi Duet Singing and English Choir Singing. The singers were restricted to sing songs only from the 1980 to 1990 era which added a twist in the competition.

The entire campus serenaded with the melodious songs presented by the participants and the music was further embellished with a mesmerising performance of background dancers colourfully dressed. The Overall winners of the competition was St. Jude’s School while the runners-Up was St. Joseph’s Academy.

On the third and the final day, the Quiz competition was held, in which the students of various schools displayed their cognition skills. In total there were 12 rounds, which included Current affairs, science, hide and seek, sports, audio round, dumb charades, numerical ability, computers/IT, visual round and rapid fire round etc.

The Overall winners of the competition was Summer Valley School while the runners-Up was St. Joseph’s Academy.

The vote of thanks was proposed by the Principal, R. V. Gardner, Ex-MLA, who thanked all the Principals of the participating schools for sending the students for all the events.

Garhwal Post has established itself as a credible, balanced and forward looking newspaper in India. Based in Uttarakhand, the daily is read by the aware, socially and culturally responsible, high-income elite of society.
Contact us: info@garhwalpost.in
https://garhwalpost.in/speed-dating-milwaukee/ meeting a new guy