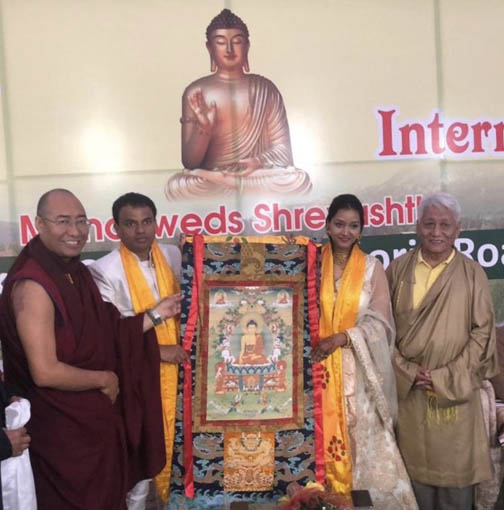 Dehradun, 27 Nov: The International Buddhist Festival was organised by Manoj Gorkela, Deputy Attorney General of Uttarakhand, in collaboration with Uttarakhand Department of Tourism and support from Doon Buddhist Committee representing the Buddhist community of Dehradun on Sunday.

The main purpose of the festival was to showcase Uttarakhand as an important Buddhist destination across the globe.

The chief attraction of the festival was the marriage of Manoj Gorkela and Shreya in Buddhist tradition as part of the festival, which was conducted in the Buddhist tradition by Khenpo Rangdol and monks of Drikung Kagyu Monastic Institute of Dehradun. Traditional cultural programmes were also performed by the students of Chenrezig School, Tibetan Homes Foundation and Sambhota School.

During the festival, one thousand Buddha statues, a Constitution of India booklet and the Buddha and his Dhamma book were also distributed.

Garhwal Post has established itself as a credible, balanced and forward looking newspaper in India. Based in Uttarakhand, the daily is read by the aware, socially and culturally responsible, high-income elite of society.
Contact us: info@garhwalpost.in
filipina dating sites free https://garhwalpost.in/funny-dating-memes/