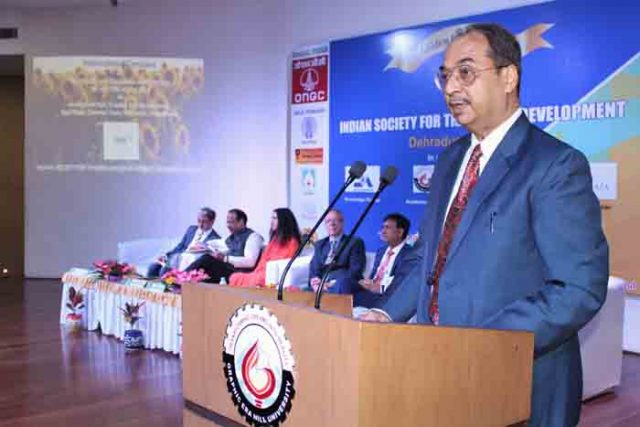 DEHRADUN, 9 Aug: An International Conclave of HR Professionals began at Graphic Era Hill University, here, today. Charge D’affaires at the Finland Embassy EriK af Hallstrom said that people in his country worked more efficiently as compared to Indians despite working for only six hours per day in their office. He also spoke about the work culture in Finland. He said that the reason for Finland people’s happiness was the work-life balance. He was addressing the International Conclave as the Chief Guest. Guest of Honour Sadhvi Bhagawati Saraswati, while addressing the gathering, said that the western countries were becoming spiritual, which was an integral part of their daily routine for peace. The world’s leading companies were emphasising yoga and meditation for their employees. She added that real happiness was to be found in oneself and not outside by knowing the self and happiness could be achieved by controlling one’s mind. The conclave is being organised with the support of Indian Society for Training and Development, Dehradun Chapter. Executive Director, ONGC, Dr Vinay Kumar Verma said that, along with technological development, there had been a rapid change in the workplace and social environment where previously grown children in a united family learned the qualities of personality development such as rituals, philanthropy, idealism from their elders. Today, due to the upbringing in the nuclear family, the child is deprived of these rituals, which has a direct impact on his workplace. Work pressure and competition have taken away their happiness. He said that, in the past, Intelligence Quotient was preferred, recently emotional quotient was being talked about at workplaces, but now spiritual quotient is being emphasised. Research suggests that happiness affects an employee’s efficiency and ability. Organiser, Indian Society for Training and Development Dehradun Chapter, Avinash Joshi said that the idea behind this International Conclave came from Prime Minister Narendra Mode’s address in which he spoke about spiritual economic zone for Uttarakhand. He emphasised that self development was more important than skill development. Professor at Centre for Executive and Professional Development, London, Dr Kanes K Rajah gave his presentation on work life balance and said that it was important to make life happy and enriched. Vice-Chancellor, Graphic Era Hill University, Prof Dr Sanjay Jasola said that for overall development of students, it was important to associate spirituality with education and such events provided motivation to the students. Director, Personnel, THDC, Vijay Goel, GEHU Pro- Vice Chancellor Prof Dr HN Nagaraja, Graphic Era University, Dean, Management, Prof Dr Vishal Sagar, Dr Ajay Saini and other faculty members and students were present at the event.

Garhwal Post has established itself as a credible, balanced and forward looking newspaper in India. Based in Uttarakhand, the daily is read by the aware, socially and culturally responsible, high-income elite of society.
Contact us: info@garhwalpost.in
plentyoffish username search