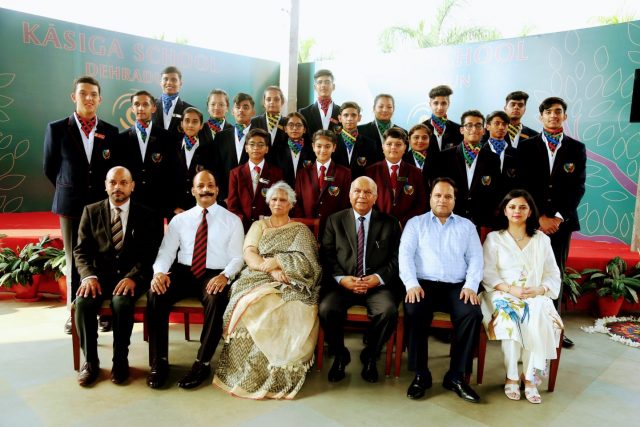 Kasiga School Investiture Ceremony 2021-22
By Our Staff Reporter
Dehradun, 9 Oct: Kasiga School conducted the Investiture Ceremony for the newly appointed student council on Saturday. The ceremony was witnessed by the founders of the school, Ramesh Batta and Poonam Batta, Director Finance, Siddharth Batta, Director Welfare, Chandni Batta, Head of School Dr. Rajput, the staff members, and the students.
The ceremony commenced with saplings being presented to the honorable guests by the students followed by the auspicious lighting of the ceremonial lamp. The school choir then performed a harmonious song that underscored a sense of purpose and hope for a better future. This melodious performance was followed by the official introduction of the school student council to the audience.
Srishti Jaiswal was elected the Head Girl and Yashraj Gupta was voted the Head Boy for the academic year 2021-22. The excitement peaked when the entire student council marched in with the school and house flags to the synchronized beating of the drums. The Captains and the Prefects for the four houses were designated their responsibilities and duties. Various other offices of responsibility were allotted to the new members of the student council. The Head of School administered the oath, and all the members of the committee were officially sworn in.
The ceremony culminated with the student council members marking their initials in the Prefects Council Records.
The Head Boy Yashraj Gupta, and Head Girl Shrishti Jaiswal, then gave speeches instilling a sense of confidence in the students and the staff. The inspiring speech was followed by a spirited performance by the school band, performing the song ‘Rock on!’ which motivated the gathering present even more. The Chairman, Ramesh Batta then took the stage and addressed the gathering. He extolled the virtues of hard-work, respect, and honesty, emphasizing their value in achieving success.
The students then gave the vote of thanks, expressing their gratitude to everyone present for their invaluable time and support in making this momentous event possible.