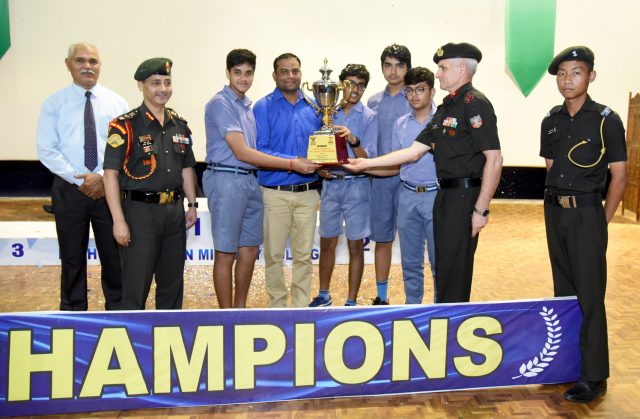 DEHRADUN, 13 Jul: Five day long IPSC Squash Championship concluded at RIMC in a glittering closing ceremony held at the iconic Thimayya Auditorium. Outstanding skills and stamina were displayed by the participants. Right from the beginning Mayo College Ajmer drew attention of the audience. Mayo College, Ajmer dominated the championship by claiming Gold Medals in Under 14 and well as in Under 17 Category. For Under 12 Category Daly College, Indore was the winners. The Gold Medal for Under 19 category was won by Modern School, Barakhamba Road, New Delhi. Master Aryaveer of DPS, RK Puram, New Delhi won the Gold Medal in Under 12 Category by beating Saharsha Sahara of Daly College, Indore in the Finals. Master Dev Sharma of Mayo College, Ajmer claimed the Gold Medal for Under 14 Category by smashing the hopes of fellow school mate Shayaj who contended with SilverMedal. Master Kulvir Sharma of Mayo College won the Gold Medal for Under 19 Category. And again his school mate Suryansh Kumar claimed the Silver Medal. Gold Medal for Under 19 Category was awarded to Tejas Chawala of Modern School, Barakhamba Road, New Delhi. Shaurya Bawa of the Modern School, Barakhamba Road, bagged the Silver Medal. Commandant’s Special prizes were awarded to Divyum Upadhyay of Rajkumar College, Dev Sharma of Mayo College, Atharva Yevele of Daly College and Shaurya Bawa of Modern School. The Chief Guest of the Closing Ceremony of IPSC Squash Championship was Brig Steve Ismail, SM, Brig Training at IMA, gave away awards and trophies to the deserving boys. Brig Ismail hailed the grit and determination of the boys for displaying outstanding skills in the courts. Col Vivek Sharma, Commandant, RIMC, presented the vote of thanks. The Coordinator of the event was Wg Cdr Hari Chidambaram.