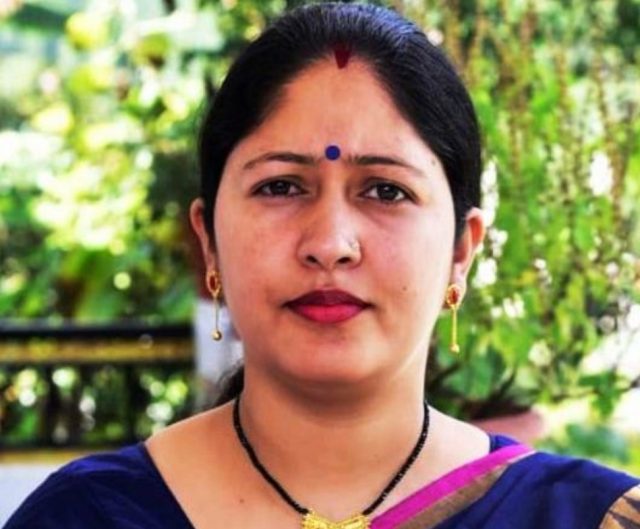 Dehradun, 5 Nov: The Congress today declared Anju Lunthi as its candidate for the by-election to the Pithoragarh Assembly seat. Sources said that the Congress leadership failed to convince former MLA from Pithoragarh, Mayukh Mahar, to contest the poll. After his refusal, the Congress leadership also tried its level best to convince former Minister Mahendra Singh Mahra to fight the election. Mahra, who is a close confidante of former CM and veteran Congress leader Harish Rawat, also refused to budge. Finally, Anju Lunthi, former Block President, agreed to contest.
It may be recalled that the by-poll to the Pithoragarh Assembly seat was necessitated by the untimely death of incumbent MLA and Cabinet Minister Prakash Pant on 5 June. The BJP had already announced that Prakash Pant’s widow, Chandra Pant, would be its candidate from the seat. So, the major battle now is between two women.
While BJP is depending on the sympathy wave in favour of Chandra Pant following Prakash Pant’s death, as well as on being the ruling party, Congress has been forced to place its trust on an emerging leader, Anju Lunthi. Congress spokesman Mathura Dutt Joshi also lobbied for the ticket but his claims were ignored by the party. Lunthi’s name was decided by PCC Chief Pritam Singh and Leader of the Opposition Indira Hridayesh in consultation with party leaders of Pithoragarh. It is interesting to see hesitation on the part of Congress leaders to contest the bypoll despite the fact that, in Pithoragarh, Congress recently won the District Panchayat polls. However, assembly elections are a different thing and the party leaders probably assumed that the BJP had the advantage of a sympathy wave as well as of being in power. The BJP had also considered Prakash Pant’s brother Bhupesh Pant as a possible candidate before finalising Chandra Pant as its candidate. The polling will be held on 25 November and the counting will be conducted on 28 November.

Garhwal Post has established itself as a credible, balanced and forward looking newspaper in India. Based in Uttarakhand, the daily is read by the aware, socially and culturally responsible, high-income elite of society.
Contact us: info@garhwalpost.in
dating a soldier uk black dating website free