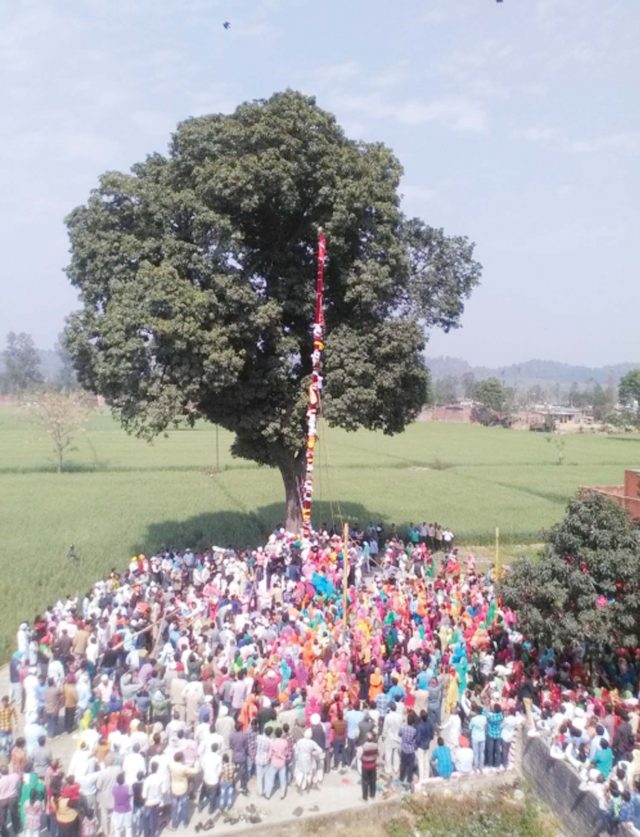 By OUR STAFF REPORTER
DEHRADUN, 17 Mar: Preparations for the Jhanda Mela have begun. On Sunday, special prayers and ‘ardas’ were offered before the ‘Jhandeji’ at the Guru Ram Rai Darbar Sahib. A team of devotees under the leadership of Mahant Devendra Dass left for Arayeyanwala, Haryana, where the ‘Jhandeji’ was raised with enthusiasm and fervour.
At 9 a.m., this morning, a one-hundred member delegation left for Arayeyanwala, Haryana. The delegation reached Arayeyanwala at noon. The old ‘Jhandeji’ was brought down with religious rituals. It was ‘bathed’ with milk, curd, ‘ghee’, butter, ‘Gangajal’ and ‘panchgavya’. In the presence of hundreds of devotees, the 60 foot ‘Jhandeji’ was then raised again. Till late in the evening, the ‘Sangats’ raising slogans praising Guru Ram Rai. Before this, as per the tradition, the priest of the Darbar Sahib had left for Bara Gaon, Haryana, on 15 March along with a ‘hukumnama’ of Mahant Devendra Dass. After this, the ‘Sangat’ started walking towards Dehradun.
On 18 March, this ‘Sangat’ will be welcomed at SGRR Public School, Sahaspur. On 19 March, the devotees will enter Dehradun. The management of the Darbar Sahib will welcome the ‘Sangat’.
In the evening of 19 March, the ‘Sangat’ will arrive at the Darbar Sahib, to be welcomed by the management of Darbar Sahib under the mentorship of Mahant Devendra Dass and will seek his blessing. Just like every year, the ‘Sangats’ will enter the Darbar Sahib via Darshani Gate.
Senior PRO of Darbar Sahib, Bhupendra Raturi, has disclosed that the preparations for the Jhanda Mela are at their peak. From 22 March, onwards, the arrival of ‘Sangats’ will gain momentum. On 25 March, the ‘Jhandeji’ will be raised here and the much awaited fair will begin.