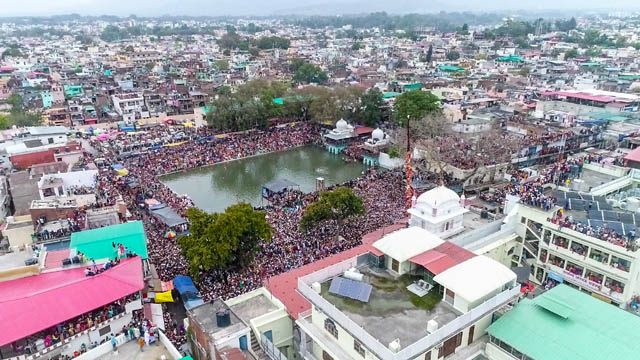 By OUR STAFF REPORTER
DEHRADUN, 25 Mar: An ocean of devotees flocked to the raising of the holy flagpole at the Guru Ram Rai Darbar Sahib, here, today. The lakhs of devotees paid obeisance to the Jhandeji. As soon as the process of placing the ‘gilaafs’ on the flagpole began, the enthusiasm of the Sangat also reached its peak. As soon as the ‘Darshani Gilaaf’ was applied, the entire atmosphere echoed to slogans raised in favour of Guru Ram Rai.
The flagpole was finally raised at 4:10 p.m. under the mentorship of Mahant Devendra Dass, today. People chanted the name of Guru Ram Rai with enthusiasm and danced enthusiastically the rhythmic playing of the ‘dhol’. With this, the historic Jhandeji Sahib Fair formally began.
On Monday morning, even before the first rays of the Sun, the Darbar Sahib and nearby areas were packed tightly with devotees. Devotees gathered to bring down the old flag pole. At 8 a.m., the flag pole was offered special prayers. The devotees bathed the new Jhandeji with milk, curd, honey, ‘Gangajal’ and ‘panchgavyon’. After that, the process of covering it with various cloth sleeves was initiated. Throughout this process, the flag pole was never allowed to touch the ground. At around 1:30 p.m., the ‘Darshani Gilaaf’ was put on the flag pole. While witnessing this sacred and much awaited ritual, emotions overflowed and tears flowed from the eyes of the devotees. Everyone was eager to touch the ‘Darshani Gilaaf’ and earn merit. At 4:15 p.m., the process of raising the new Jhandeji was initiated. The Sangat lifted up the new flag pole with the help of wooden lifters. Right at this time, the much awaited annual ‘miracle’ occurred with a falcon performing ‘parikramma’of the flag pole.
Shri Darbar Sahib Management had arranged for a live telecast of the event. The devotees present in other parts of the Darbar Sahib were able to see the live telecast on LED screens put upon the occasion.
Devotees have reached from all over the world to participate in the event. They have come from western UP, Punjab, Haryana, Rajasthan, Uttarakhand, Himachal Pradesh as well as foreign countries. They sang ‘bhajans’ and ‘kirtan’ about ‘Guru Mahima’. The devotees also took a dip in the holy pond located in the premises of Shri Darbar Sahib.
On the occasion, Mahant Devendra Dass congratulated the people of India and Uttarakhand people and blessed the sangat. He said that the Jhandeji fair spread the message of love, harmony, mutual brotherhood, compassion and peace.