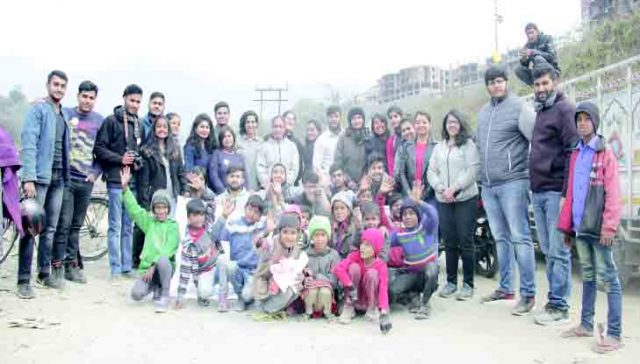 By OUR STAFF REPORTER
DEHRADUN, 6 Jan: The year round, JOY (Just Open Yourself) has been hosting clothes distribution drives for underprivileged individuals. The youth oriented group has been working for the welfare of society for more than three years.
Today, the Society hosted a major clothes distribution drive in collaboration with SPECS and UAJUSP at Aryanagar Basti, here. The team had appealed for donations from all citizens by placing posters and donation boxes throughout the city. After having received a generous amount, it dedicated its efforts to washing and segregating the clothes. The team first gathered at Sai Mandir, Rajpur Road, and later headed to the donation venue. A total number of 25 volunteers had come along to distribute more than 50,000 clothes to the people. With the temperature declining by the day, most of the underprivileged find it hard to cope. This drive was conducted to not only help the individuals in need put also to inculcate the act of generously donating.

Garhwal Post has established itself as a credible, balanced and forward looking newspaper in India. Based in Uttarakhand, the daily is read by the aware, socially and culturally responsible, high-income elite of society.
Contact us: info@garhwalpost.in
find a gay guy in my area https://garhwalpost.in/fun-dating-activities/ https://garhwalpost.in/dating-sites-adelaide/