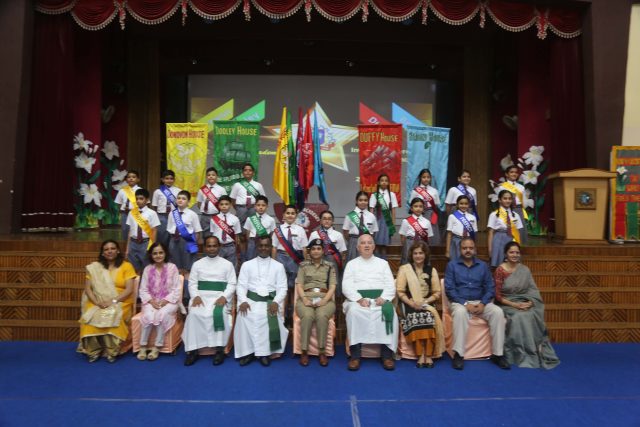 By OUR STAFF REPORTER
DEHRADUN, 14 Aug: ‘A leader is one who knows the way, goes the way and shows the way’.  In keeping with this spirit, St. Joseph’s Academy Jr. School held its annual Investiture Ceremony on August 14, 2021.
The momentous occasion commenced with a prayer by the Junior School Coordinator, S. Hasan followed by the lighting of the lamp by the Chief Guest, DIG Garhwal Range,  NEERU GARG,  SJA Principal Rev. Bro.  Jeyaseelan S., Vice Principal Rev. Bro. Astinus,  Community Leader Rev. Bro. J C Carroll and all the Coordinators.
The Junior School Choir brought grace and subtlety to the occasion by soulfully singing “BELIEVE IN YOURSELF ” which was an affirmation to the day indeed being a glorious one.
A spectacular dance performance symbolizing perseverance and optimism by the Jr. School participants elevated the mood for one and all. An audio-visual presentation on the four traditional Houses and the new Student Council Members was presented before the august gathering.
This paved the way for the most awaited moment of the day- the Oath taking ceremony. At the helm of the grand ceremony were the newly elected 18 member Student Council leaders marching smartly towards the stage to the beats of the school drum while their parents looked on with brimming pride.
The Oath was administered by Hasan and the badges were conferred upon by IPS Garg, Rev Bro. Jeyaseelan and other school dignitaries on the youngest prefects of the school. The proud parents were also called on the stage to bestow the sash on their young ones.
The Chief Guest Neeru Garg pinned the badges on the Head Boy, Anjaney Anugreh Bhhardwaj( class V E) and Head Girl Kashvi Bhatia ( class V D).
Stating that “with great power comes great responsibility”, Hasan extolled the new student leaders to keep the school flag flying high and also congratulated the proud parents.
The highlight of the ceremony was the handing over of the candles to the newly appointed Student Council Members by the Upper Kindergarten students as a symbolic gesture of congratulations and to light the way ahead for the Council.
The Jr. School Choir sealed the sentiments by gracefully singing, “The Leader in Me”.
The vote of thanks was given by the Head Boy and Head Girl of the Council.
In her address to the gathering, IPS Neeru Garg spoke about leadership. Stating that leaders are not known by their physical strength but by the strength of mind, she asked the gathering to assert how you view a leader.
“How would you want your leader to be? What do you want from you leader? A leader should always have a clear vision of what he is doing and what he wants to achieve.” She also stated the characteristics a good leader should have such as patience, diligence and calmness .
Encouraging the Council, she said, “Identify your strength and believe that the sky is the limit”.
Her motivational speech was met with great applause and she was presented a token of gratitude by Rev. Bro Jeyaseelan and Hasan.
Bro. Jeyaseelan said it was a proud moment for the parents and management of the school. ” I feel very proud of you that you have gone through a panel of interviews and hard work to achieve this position during this pandemic”, he said.
The Head Boy and Head Girl proposed the Vote of Thanks. The ceremony concluded with every Josephite singing with pride, the School Song.

Garhwal Post has established itself as a credible, balanced and forward looking newspaper in India. Based in Uttarakhand, the daily is read by the aware, socially and culturally responsible, high-income elite of society.
Contact us: info@garhwalpost.in
farmers only dating site commercial