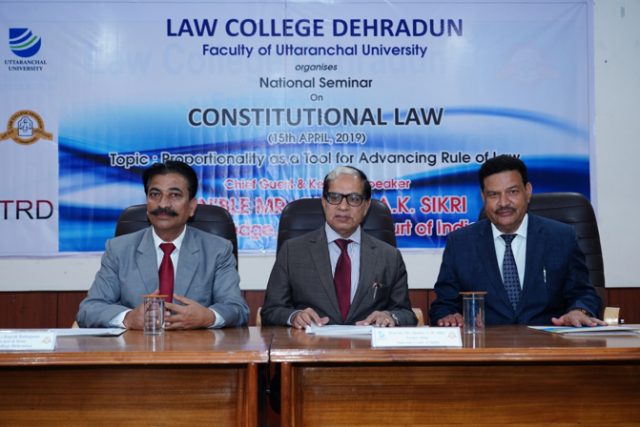 By OUR STAFF REPORTER
Dehradun, 15 Apr: A National Seminar on Constitutional Law was organised today at Law College Dehradun, Uttaranchal University. The topic of the seminar was “Equality – An instrument of promoting rule of Law”. Former Judge of the Supreme Court of India, Justice AK Sikri was present as the Chief Guest and Speaker at the Seminar. About 400 participants from various Indian universities and colleges attended the event. Lakhs of followers watched Justice Sikri live on the Facebook page of Uttaranchal University and YouTube channel. Legal channel lawctopus live telecast the event.
Chancellor Jitender Joshi felicitated the Chief Guest and presented a replica of Baba Kedarnath Temple as a souvenir.
Principal Dr Rajesh Bahuguna stated that the principle of equality was successfully applied in the field of justice, administration, policy determination and penal laws. According to Dr Bahuguna, today’s seminar was organised for the purpose of enabling the students know the judicial opinion concerning the concept of equality as the basis of conduct of rule of law in the country.
Justice Sikri elaborately explained the concept of rule of law and the principle of equality. Taking examples from the judgements of the Indian and American Supreme Court, he extensively dealt with the concept of equality. He said the principle of equality was not only an effective instrument for establishing rule of law but also forms the basis of the principle of rule of law. He further maintained that rule of law was part of the basic structure of the constitution and did not allow the government to effect amendments. It meant that highest office-bearers like the President, the Prime Minister and Chief Justice along with class four employees were governed by the principle of rule of law. He also analysed some of his judgements which later on became landmarks on equality and rule of law. He cited judgements in famous cases like Modern Dental Health case, Aadhaar case, powers of Lt Governor of Delhi case, Transgender case and the case related to fire–crackers in Delhi.
He commended not only the majority judgements but also discussed the dissenting judgements with gravity and all seriousness.
At the end of the programme, an open session was organised in which students asked questions related to his landmarks judgements in various cases. Dealing with the question of judicial review, he maintained that any executive or administrative action came within the purview of the judicial review. Speaking on the question of reasonable restriction provided under the constitutional scheme, he stated these restrictions could be imposed only through proper legislation and mere executive orders of the government were not adequate. Replying to a question, he further maintained that judges enjoyed considerable discretionary powers because of the absence of comprehensive penal policies in India. He cautioned the judicial officers to carefully use their discretionary judicial powers in consonance with the principles of equality and the doctrine of rule of Law.
Those present on the occasion were Chancellor Jitender Joshi, Principal & Dean Dr Rajesh Bahuguna, Dr Poonam Rawat and hundreds of students.