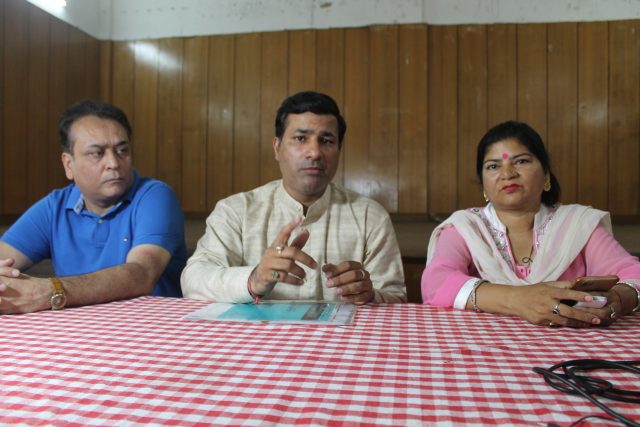 By OUR STAFF REPORTER
Dehradun, 20 Jun: A press conference was held by Ravinder Anand, former Chairman, Mandi Samiti, regarding allegations against the CPU of illegal acts.
On this occasion, he said that, on 3 June, he was abused by CPU sub-inspector Shailendra Singh Negi and his companion, Kuldeep Saini, who tried to loot him by reaching into his pocket. The recording of this act was caught in the CCTV camera of a hotel on Tyagi Road. Later, this became viral on social media.
A complaint was lodged by Anand with the DG, Law and Order, Ashok Kumar. Taking cognisance, it was passed on to the SP, Traffic. Anand alleges that, despite this, no action had been taken till date. Ravindra Anand and a delegation had met the SSP, Dehradun, in this regard, but that, too, resulted in nothing.
Anand alleged at the press conference that the police was protecting its erring personnel.
He claimed that, on the other hand, he was being pressurised by some secretaries of ministers to take his case back.
Anand warned that, if there was further delay in taking action in this matter, he would be compelled to launch an agitation. The Police Administration would be responsible for the consequences. He is also planning to approach the judiciary in the matter.
Also present at the PC were BJP leaders Babita Sahotra, Rajiv Sachar, Vijay Kathuria, Amarjeet Singh Kathuria, Arun Sharma, etc.

Garhwal Post has established itself as a credible, balanced and forward looking newspaper in India. Based in Uttarakhand, the daily is read by the aware, socially and culturally responsible, high-income elite of society.
Contact us: info@garhwalpost.in
https://garhwalpost.in/find-hookup/