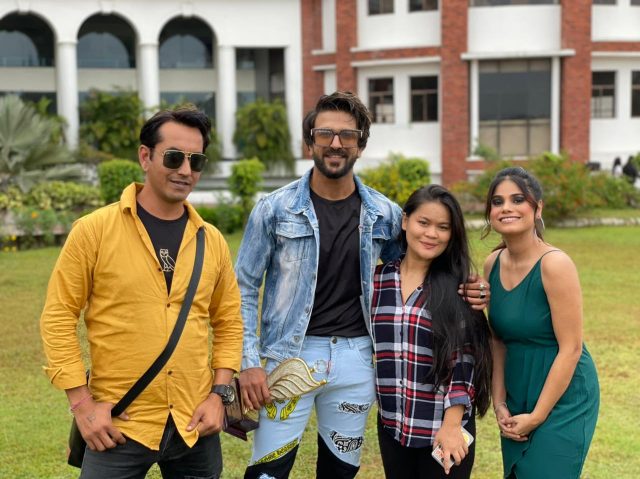 By Our Staff Reporter
Dehradun, 17 Oct: The promotional music video shoot for Jyotica Tangri’s new song, ‘Vehem Ho Gaya’, featuring rapper and music producer Akkhi, was shot at Graphic Era Hill University this Sunday. It has been directed by Jot Sohal.
The spectacle attracted many on-campus viewers and gave the opportunity to artists from all around the city to feature in the video.
Jyotica is famously known for her debut on ‘Voice India 2016’, and has not looked back since. She has released many songs such as ‘Pallo Latke’, ‘Mungda’, ‘Ishq de Fanniyar’, ‘Gallan Kardi’ and many more.
Akkhi has been recently releasing his singles such as ‘Akkhan Teriyan’ and ‘Tamasha’ on Zee Music. He has an upcoming collaboration with Sonu Kakkar alongside many more to feature in films.
When asked about her experience in Doon,
Jyotica said she was super excited about shooting her lovely song. The people of Dehradun had been very nice and hospitable. She added, “The shoot makes me nostalgic and brings back old memories from when I was in college…”
Kicking off at six in the morning till eight at night, the shoot day was their last in Dehradun.
Akkhi shot his last song, ‘Akkhan Teriyan’, in Doon some months ago. He is in love with the city so much that he shot his song with Jyotica Tangri, here, today. In future, also, he wishes to shoot as many songs as possible in Dehradun. Jyotica’s childhood version has been played by Tarini Chandel, a Class 2 student of Convent of Jesus and Mary. The song has been written and composed by Akkhi. Akkhi also added that he is grateful to Anurag Bedi, Head of Zee Music who was very keen that we should shoot this video in the mesmerising Doon Valley. And he was right. The shoot has turned out to be amazing.