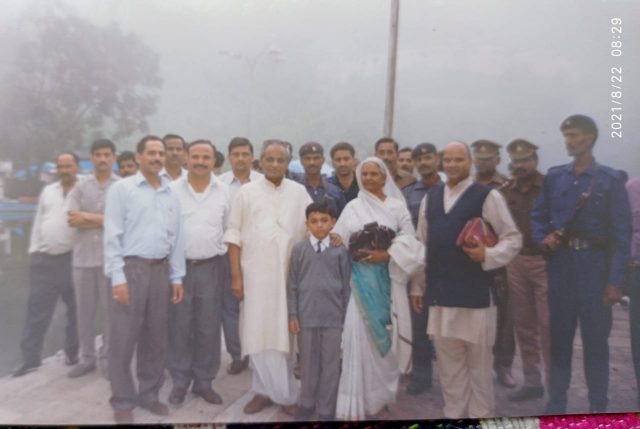 By Sunil Sonker
Mussoorie, 22 Aug: Senior Mussoorie BJP leader Madan Mohan Sharma recalls that, in 1994, Chief Minister Kalyan Singh had visited the hill town with his family and stayed at the PWD guest house. He said that Kalyan Singh had come to admit his grandson to Mussoorie Public School at his advice.
On the occasion, he had also advised BJP workers on how to strengthen the party.
Kalyan Singh died on Saturday evening at the Sanjay Gandhi Institute of Medical Sciences (SGPGI), Lucknow. People here, too, have mourned his passing.
Despite being the Chief Minister, Kalyan Singh reached Mussoorie Public School as a parent and got his grandson enrolled like a normal parent. Sharma was made the child’s local guardian.
Madan Mohan Sharma adds that Kalyan Singh was a very simple personality. A party meeting was held at the guest house. At that time, Sharma was President of the Mussoorie BJP, Radheshyam Tayal was the General Secretary and Vijay Ramola, President of the Yuva Morcha. He says that Kalyan Singh was very earnest about Ram Temple construction. Kalyan Singh used to say that, no matter what happens, he would construct the temple in Ayodhya at any cost. Prime Minister Narendra Modi had fulfilled Kalyan Singh’s dream.
Sharma added Kalyan Singh liked Mussoorie very much and visited it many times to enjoy the natural beauty.