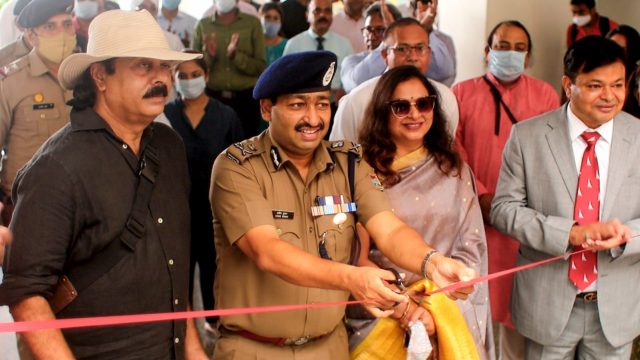 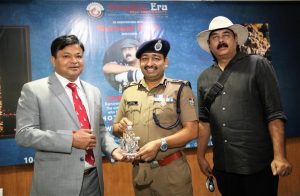 Speaking on the occasion, Ashok Kumar recalled his old association with photographer Kamal Sharma. He added that Kamal Sharma was a passionate photographer and it was a matter of great courage that being present in another country when the 9/11 terror struck, most people would have chosen to stay away from the terror site and be safe, but he chose to go as close as possible to the Twin Towers and click the photographs of the terror strike. He added that it was also laudable that Sharma was able to maintain his composure in those moments and click very high resolution photographs of the event. He recalled a particular photo of the Empire State Building clicked by Sharma and displayed at the exhibition. He observed that the photograph vividly showed almost every floor of around a hundred floors of the building. He said that he had met Sharma for the first time in 2008 on the recommendation of another IPS Officer posted in Delhi at that time. 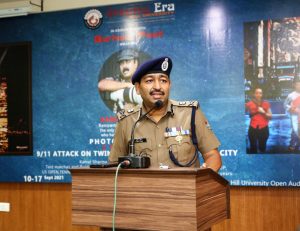 Kumar reminded the audience that photographs taken by Sharma on 9/11 would become a historical record for a long time to come. Kumar also congratulated Graphic Era Deemed University for making its mark in the top 100 universities of the country. He observed that heart warming memories were a legacy to cherish in the form of photographs.
Chancellor of the University Prof Kamal Ghansala recalled his two and half decade long association with Garhwal Post and its Editor, Satish Sharma, and called upon the students to see and appreciate the photographs as 9/11 terror changed the entire world forever. He particularly called upon the students of mass communication to learn from the photographs taken by world renowned photographer Kamal Sharma with whom he shared his first name. He added that it was a moment of pride for him to be organising this photo exhibition at Graphic Era. Ghanshala said that a photographer was an image maker, using different camera angles to convey the happenings in society to the people through photographs. He added that Kamal Sharma was an extraordinary photographer who followed his photographer’s dharma even during the 9/11 terror incident as he was present at the scene and his photographs conveyed a clear message that that, while creation was a time taking process, destruction could be immediate and also a painful one. Professor Ghanshala also urged Kamal Sharma to pass on his photography knowledge and nuances to the students interested in photography. On this occasion, Ghanshala also gave a cash prize of Rs 1 lakh to Kamal Sharma.
Arun Pratap Singh, Special Correspondent with Garhwal Post, introduced the audience to the objectives of the photo exhibition. He said that 9/11 had changed the whole world forever. Such exhibitions were a powerful reminder of the dangers of terror and how it could adversely affect the whole world. He said that those who forget the past and history tend to repeat their past mistakes and blunders. Such incidents ought to be never forgotten otherwise such terror strikes would be again repeated. Singh also recalled the long association of Garhwal Post and the Graphic Era Varsity and said there were many similarities between the two. Both were local brands but both aspired to excel in the respective fields of journalism and higher education. He further called on the audience to bring in their friends and families to the exhibition that would continue for a week. He also disclosed that Garhwal Post would be bringing out a special edition of the newspaper tomorrow on the occasion of twentieth anniversary of the 9/11 attack.
Photographer Kamal Sharma said that he would always be grateful to God that, coming from a small town like Ferozepur in Punjab, he could reach where he was. He also recalled how his photographs on 9/11 were appreciated by cricketers like Sachin Tendulkar and Harbhajan Singh who ordered copies of the pics and even took his autograph on the photographs ordered by them. He reminded that he had gone to US to cover a double wicket tournament in New York and also to cover the US Open Tennis Grand Slam tournament and was lucky to have clicked photographs of terror strike hours before the terror strike and just after.
Prof Alaknanda Ashok also appreciated the photographs and the organisation of the photo exhibition on the 9/11 terror strike by Garhwal Post and Graphic Era. She also appreciated the photo skills of Kamal Sharma.
Present on this occasion, were Pro-VC, Graphic Era Hill University, Prof Dr Jyoti Chhabra, Garhwal Post Editor Satish Sharma, Registrar Himanshu Dhulia and Dr Anjali Nauriyal were among those present. Sahib Sablok convened the event. 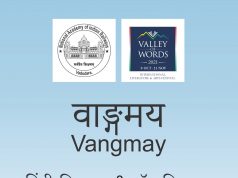