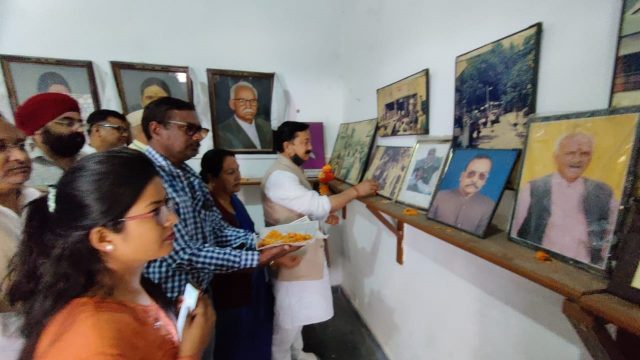 By Our Staff Reporter
Mussoorie, 28 Apr: Uttarakhand Congress State President Karan Mahra started his 12-day Garhwal tour from here, today. He visited the Martyrs’ Memorial along with many senior Congress workers and paid homage.
Talking to reporters, Mahra said that the party High Command has given him the responsibility of strengthening the Congress in Uttarakhand and soon a big change would become visible. He said his 12-day tour of Garhwal will involve meetings with workers and discuss party strategy. He added that only those workers who are active and want to work will be handed responsibilities.
Attacking the Pushkar Singh Dhami Government of the state, he said that it is totally confused. Even the ministers don’t agree on any subject, from which it is clear that there is no coordination. He said that the Chardham Yatra is associated with tourism and employment along with the state’s economy. But no concrete preparations have been made the Yatra. Similarly, the policy on Corona was lacking. Large crowds are expected at the Char Dhamd, but the government has made no preparations. This would damage pilgrimage along with tourism.
Present on the occasion were Congress State Vice President Jot Singh Bisht, Jot Singh Gunsola, Manmohan Singh Mall, Gaurav Aggarwal, Sushil Aggarwal, Upender Thapli, Rajeev Aggarwal, Sushant Vohra, Sharukh Khan, Arvind Sonker and many others.