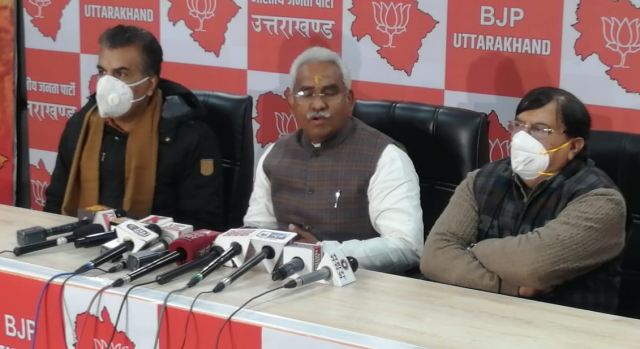 Dehradun, 7 Jan: BJP State President Madan Kaushik today strongly condemned the controversial statement of former CM Harish Rawat in respect of PM Narendra Modi’s security lapse case and demanded that this should be brought under the purview of high-level investigation. Kaushik was addressing a press conference at a local hotel here this evening.
He alleged that Harish Rawat had been in charge of Punjab and had made a special contribution in making Channi the CM. Therefore, on such an occasion, Harish Rawat’s saying that a bomb would not have exploded if the PM had waited for half an hour more instead of returning created doubt that he had a role to play. So, Harish Rawat’s statement should also be included in the high level investigation regarding the security of the Prime Minister.
Madan Kaushik revealed that the Uttarakhand BJP had demanded that Harish Rawat’s statement also be taken in the purview of the investigation of this case. In what context he had spoken what he said and what other information did he have about this incident. The BJP State President disclosed that, in this regard, a memorandum had been given by the party to the President through the Governor, demanding a high level inquiry in the case of the lapse in the security of Prime Minister Narendra Modi. He claimed that this conspiracy could have been done out of political hatred and irresponsible statements of Congress leaders, especially in Uttarakhand, and particularly Harish Rawat, who was in a hurry to become CM again. It indicated that, in the coming days, similar incidents might happen in other Congress ruled states, also. He claimed that such statements were even more regrettable in the wake of the fact that two prime ministers of the Congress party had lost lives in terror attacks.
Rajya Sabha MP Naresh Bansal, State Spokesperson Suresh Joshi, Ajit Negi and Sanjeev Verma were present along with Madan Kaushik at the press conference.