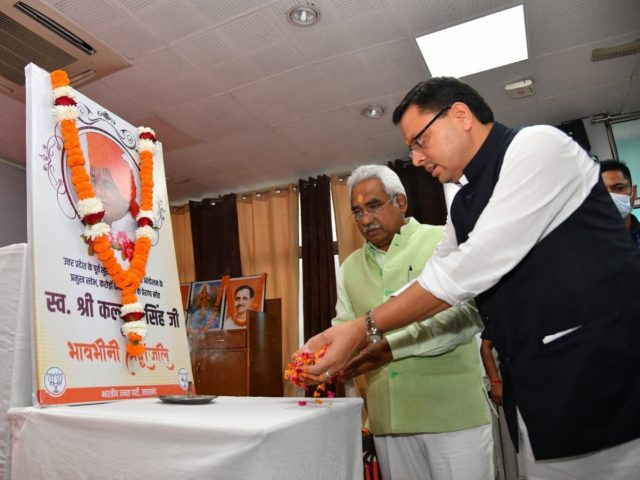 By Our Staff Reporter
Dehradun, 28 Aug: BJP State President Madan Kaushik today said that senior BJP leader Late Kalyan Singh was not only a leader of great stature but also a great human being. He also lauded the role of the late BJP leader as a patron of the party and said that Kalyan Singh played a significant role in the progress and expansion of the BJP party in the country and particularly in UP.
Kaushik said that Singh had carved a special place at the national level in the BJP as a result of his integrity, hard work and dedication to serve the society and the organisation. Kaushik asserted that Kalyan Singh’s political stature was that of a statesman, efficient administrator, a grassroot leader and a great human being at the same time. He had an indelible contribution in the development of Uttar Pradesh.
Kaushik said that Kalyan Singh had made a very crucial contribution to progress and expansion of Jan Sangh and BJP in Uttar Pradesh. For him, gaining power was secondary in front of his strong commitment to ideology and social service. The BJP State President added that due to his dynamic decisions,  conscientiousness and chaste life, Kalyan Singh would continue to inspire all for a long time to come.
On this occasion, Chief Minister Pushkar Dhami said that in the death of Kalyan Singh, the country and the party had lost a great personality. He noted that the sharp political acumen, administrative efficiency and development oriented approach of Kalyan Singh had left an indelible mark at the national level. He said that it was rare to find a great personality like Kalyan Singh, a strong nationalist and added that despite his passing away, he continued to reside in the heart of the people. With his diligence, he made his unique contribution to the progress of the nation by connecting the farmers, poor and deprived sections with the mainstream development, while holding various constitutional posts.
On this occasion, State General Secretary Organisation Ajeya Kumar said that due to the departure of Kalyan Singh, he felt a huge void almost impossible to fill. From the time of Jana Sangh, Singh had worked hard to make the BJP strong and reach out to every section of the society. The nation of India would always remember him for his important role in the Ram Janmabhoomi movement. His death was a big loss for Indian politics. Rajya Sabha MP Naresh Bansal said that the revered Kalyan Singh was that stalwart figure of Indian politics, who left an indelible mark on the nation and society with his personality and creativity. His long political life was devoted to the service of the masses. He became to be known as the most popular Chief Minister of Uttar Pradesh of his era.
State General Secretary Kuldeep Kumar, Satpal Maharaj, MLA Harbans Kapoor, Dewan Singh Bisht, Chandra Pant, Adesh Chauhan, Bharat Choudhary, Khajan Das, Rajed Shukla, Harbhajan Singh Cheema, Kunwar Pranav Champion, Dr Devendra Bhasin, Puneet Mittal, Kaustuba Nand Joshi, Manveer Singh Chouhan, Dr Aditya Kumar, Madhu Bhatt, Vinay Goyal, Naveen Thakur, Sunil Saini, Sanjeev Verma, etc., were among the BJP leaders who were present on the occasion.