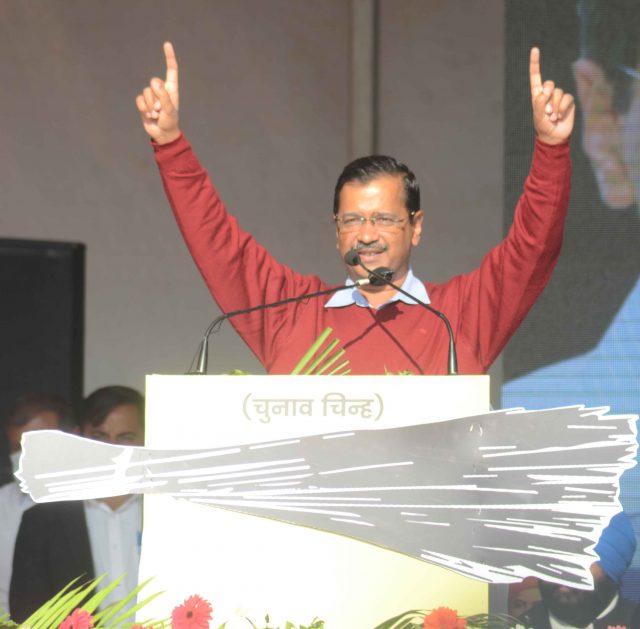 By Arun Pratap Singh
Dehradun, 3 Jan: Aam Aadmi Party National Convener and Delhi Chief Minister Arvind Kejriwal said that Ex-Servicemen would not have to run from pillar to post after retirement if AAP is voted to power in Uttarakhand.
Addressing an AAP rally at the Parade Ground here, today, Kejriwal claimed that the ex-servicemen would be given direct government jobs by the AAP Government in Uttarakhand. They would get the opportunity to participate in the Nav Nirman (re-building) of Uttarakhand. The Delhi CM further promised that in case a AAP Government was voted to power, then Chief Minister Ajay Kothiyal himself would hand over a cheque of Rs 1 crore to the family of any soldier from the defence forces or para military forces who is martyred anywhere.
Delhi CM Arvind Kejriwal is on a tour of Uttarakhand. It was his sixth recent tour to Uttarakhand in relation to the upcoming state assembly elections. In the past, Kejriwal has made several big promises that include free electricity, government jobs to one lakh persons, free pilgrimage and a guarantee of Rs 1000 to women every month. This time, his promises were targeted at the defence personnel and their families.
Kejriwal said, “Uttarakhand is the land of the country’s devotees. Every particle is filled with patriotism. Much of the recruitment to the Armed Forces is from Uttarakhand. This is the land of martyrs and heroes.”
He said that, before joining politics, when he used to run an NGO, he used to feel that there was no one to take care of the martyrs’ families and felt very bad. On becoming the Chief Minister of Delhi, he thought that the martyrs’ families ought to get Rs 1 crore at least as a mark of respect. Now, if the AAP comes to power, the government would grant Rs 1 crore, each, to the martyrs’ families.
Kejriwal called upon all the soldiers to work with the Aam Aadmi Party for the re-building of Uttarakhand. He said that, if the soldiers support the Aam Aadmi Party, no one can stop the formation of an AAP government. He told the public that, in the past years, it had provided opportunities by voting for the BJP and Congress. Now the people ought to give AAP a chance and see the outcome.
Kejriwal claimed he was a devotee of Babasaheb Ambedkar, whose entire life had been a struggle. Babasaheb laid emphasis on education. He did two PhDs from abroad in the old days. Baba Saheb had a dream that, if every child in society gets good education, then poverty could be eradicated from society. So many governments had come in 70 years, but none fulfilled Baba Saheb’s dream. Governments deliberately did not pay attention to education. BJP and Congress deliberately kept society illiterate, alleged Kejriwal, adding that he had vowed he would give better education to every poor child of the country. The AAP Government had done this in Delhi and the party would fulfil Babasaheb’s dream.
Addressing the public, Colonel Ajay Kothiyal (Retd) said that whenever Arvind Kejriwal came to Uttarakhand, the aspirations of the people rose and with every promise and announcement made by him, their enthusiasm increased. He claimed that the people of Uttarakhand had expectations from the visits of Arvind Kejriwal.
Earlier, party workers from different areas under the leadership of AAP state in-charge Dinesh Mohania and Colonel Ajay Kothiyal welcomed Kejriwal at Jolly Grant Airport.

Garhwal Post has established itself as a credible, balanced and forward looking newspaper in India. Based in Uttarakhand, the daily is read by the aware, socially and culturally responsible, high-income elite of society.
Contact us: info@garhwalpost.in
https://garhwalpost.in/expat-meetup-barcelona/ date night dancing in your living room sexy women dating site