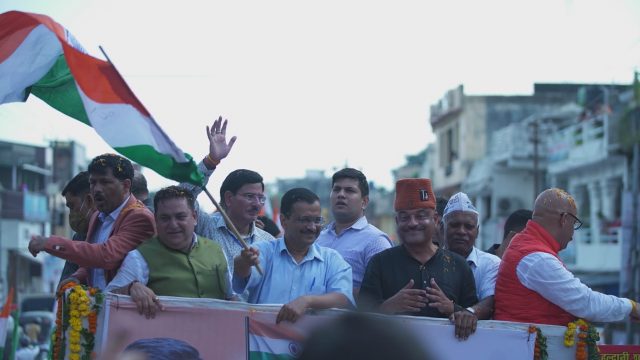 By Our Staff Reporter
Haldwani, 19 Sep: Aam Aadmi Party Convenor and Delhi Chief Minister Arvind Kejriwal arrived here, today, on his third visit to Uttarakhand. Earlier, he had visited Dehradun and made a number of electoral announcements.
At a press conference, here, he promised to provide jobs to the unemployed youths of Uttarakhand should the AAP be elected to power. He promised that, along with Col Kothiyal – the Chief Ministerial candidate – he would fix the 21 year old problem of the state in 21 months.
He said that Uttarakhand had great potential in the tourism sector, which would provide jobs and revenue. He said more jobs would also address the issue of migration. He alleged that the governments, thus far, had looted the people – had they spent as did the AAP Government in Delhi, conditions would change radically. He also mentioned the ‘achievements’ of the Delhi Government.
He also listed the qualifications of Col Kothiyal to be Chief Minister. He appealed to the people to change the politics of the state.
Kejriwal also took part in a ‘Tiranga Rally’ of the party taken on the streets of the city.

Avalanche hits Indian Navy team on trek to Mt Trishuli in Chamoli, search on for 6 members