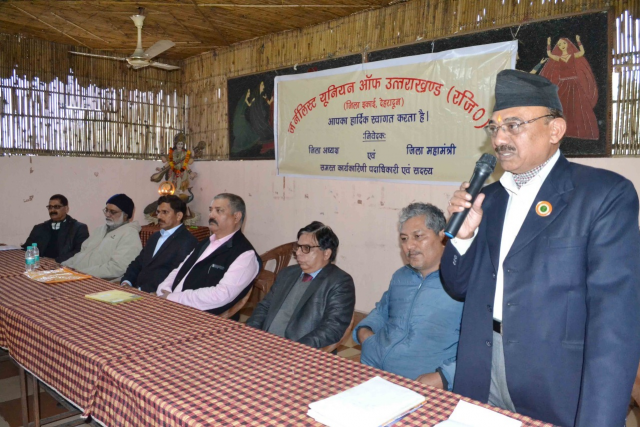 DEHRADUN, 22 Feb: Biannual Conference of Dehradun District Unit of Journalists Union of Uttarakhand was held here today during which elections for the new district unit of the union were also held. Outgoing General Secretary of Dehradun District Unit, Chetan Khadka was elected as President of the Dehradun District while Avneesh Gupta was elected General Secretary. Dhanraj Garg was elected as Treasurer of Dehradun district unit. Speaking on the occasion, chief guest and Chairman of Uttarakhand Advertising Monitoring Committee, Rajendra Joshi cautioned the journalists against publishing unverified news and said that one false news published by one media house was enough to spoil image of the entire media. He called upon the media persons to be more responsible and factual in their reporting and not go after blind sensationalism. Special guest and senior journalist Ashok Prasad Misra said that the journalists did not have any special privilege under the constitution. However, the rights and privileges they had as any other Indian were enough for them to do their job. He also noted that the governments were in a habit of creating divide among journalists and he cited the provisions related to accreditation of journalists. He stressed that accreditation was meant to facilitate reporters in their jobs but the governments had granted some special facilities to accredited journalists which were misused by some journalists to get undue personal benefits. On the other hand, those working on the desk were not even recognised by the government and were deprived of any facility by the government. Special guest, environmentalist and social worker Jagdish Bablapraised the work and commitment of Journalists Union of Uttarakhand. He said that he had been in touch with the union office bearers for a long time and had seen that the union unlike most other unions was fully committed towards welfare of the journalists. IJU’s National Executive member Girish Pant said that the Journalist Union of Uttarakhand had completed 12 years of its existence and it had strived hard towards welfare of journalists. He reminded that Life Insurance of all the members up to 60 years had been undertaken with the help of Hansa Foundation and efforts were on to ensure insurance coverage for the senior members also who were above 60 years of age. He also lamented the fact that governments were discriminating against small and medium scale newspapers and were denying them their just share of government advertisements. On this occasion, the state president of the union, Arun Pratap Singh, said that role of the Union had changed over the years. Now the major struggle for the unions was against the government which was marginalising the smaller and medium scale publications by not giving their due share of government advertisements. He also remembered Press Council of India member and senior office bearer of IJU Prabhat Dash who had passed away recently. He said that Dash was deeply attached to the Journalists Union of Uttarakhand was always eager to help it. Union’s State General Secretary Uma Shankar Pravin Mehta also called upon the media persons to pay special attention to the quality of content and not merely indulge in copy- paste of the matter. Chetan Singh Khadka, the outgoing general secretary of the district unit of the union, presented the details of the union’s work. He said that the union was constantly trying to solve the pending problems of journalists. In the session, Dr Javed, CEO of Velmed Hospital, announced that Velmed Hospital would work with the union and help them get discounts in any treatment carried out at Velmed Hospital. In the post lunch session, elections were held for the new district executive under the supervision of Election Officer Uma Shankar Praveen Mehta and Deputy Election Officer Sanjeev Pant. While Chetan Khadka was unanimously elected as District President, Avneesh Gupta was unanimously elected district general secretary. Dhanraj Gargwas unanimously elected Treasurer. The meeting was attended amongst others by Sanjeev Pant, Dwijendra Bahuguna, Lalita Baluni, Jyoti Bhatt Dhyani, Zahid Ali, Chetram Bhatt, Moolchand Sheershwal, Rakesh Barthwal, SP Uniyal, Suryaprakash, Samina, Sanjay Pathak, Deepak Gupta, Vijay Kumar Sharma , Sanjay Aggarwal, Mahendra Singh Chauhan, Naveen Barthwal, Abhinav Nayak, Mukesh Rawat, Mukesh Singhal, Satish Kumar, Vinod Pundir, Adhir Mukherjee, Jagmohan Singh Rawat, Amandeep Kaur, Atul Bhartaria, Surendra Arya, Kanwar Singh Sidhu, Sandeep Rawat, Amit Negi, PS Negi, Girish Tiwari, Ajay Gulati, Shardul Rana, Veeresh Kumar, Deepak Farswan, Trilok Pundir and Rakesh Dobhal.