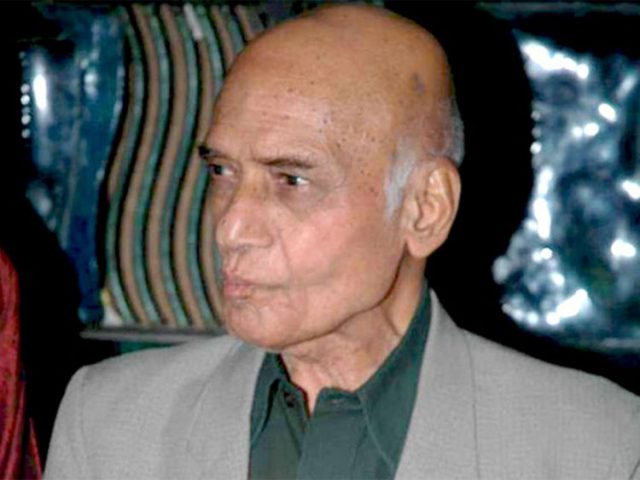 In the death on 19 August of Mohammed Zahur Hashmi – well known as ‘Khayyam’ – India has lost one of its most versatile music composers. He was 92.
IF versatility is to be the yardstick of measuring the artistry of a music composer, then Khayyam stood head and shoulder over his peers. Right from his childhood years, he possessed a natural ear for melody as if he was born with a musical instrument in his hand.
If ‘Music be the Food of Love, Play on’; even though Khayyam had not read this epigram in Shakespeare’s “Twelfth Night”, he certainly practiced it in his long and great reign as India’s undisputed music maestro. So much so that music had become an inseparable part of his daily routine. Born in Punjab in 1927, he ran away from his home and went to live with one of his uncles in Delhi. It was there that he got trained under Pandit Amar Nath, who was then a well known composer and classical singer. That was in a way his baptism by fire in the world of music.
His wanderlust then took him to Lahore – then India’s movie capital. There he became an assistant to Baba Chishti, a well known music director but he did not stay there longer than six months. The year was 1943 and he was a lad of just about 17. His next destination was Ludhiana; however, his musical journey was interrupted when he joined the Army during World War II.
World War II had ended and an interim Indian government with Jawaharlal Nehru as the Prime Minister had been installed in New Delhi in September 1946 as a run up to India’s eventual Independence on 15 August 1947. Political uncertainty then hung on the country’s horizon, and it was courageous indeed of a 21-year old with hardly any resources or contacts to go to Bombay and try his luck in that El Dorado and reach for the stars. He wanted to become an actor and managed to get a small role in SD Narang’s ‘Yeh Hai Zindagi’ in 1947. Acting assignments were then difficult to come by, and per force he became an assistant to music directors like Husnlal-Bhagatram, Bulo Irani and Aziz Khan. He thus managed to secure a toehold with the music fraternity in Bollywood.
He made his unheralded debut as Sharmaji of the composer duo ‘Sharmaji-Varmaji’ with ‘Heer Ranjha’ in 1948. However, it took him another two years to gain a semblance of recognition with his ‘Akele mein woh ghabrate to honge, bitaa ke mujh ko pachhataate to honge’ sung by Mohammed Rafi in ‘Biwi’ (1950). It took him three more years before he found acceptance with ‘Shaam-e-gham ki kasam’ rendered by Talat Mehmood in ‘Footpath’. There was no looking back then, and Khayyam got one hit song after another. ‘Woh subha kabhi to aayegi’, ‘Chin-o-Arab Hamara’ and ‘Aasman pe hai Khuda aur zameen pe hum’. All these lyrics were written by Sahir Ludhyanvi and rendered by Asha Bhosle and Mukesh.
Music composers and song writers generally go hand in hand. A lyricist’s job is to pen a few lifeless words on a piece of paper, and it is for the music composer to turn those words into soulful or entertaining songs. Thus many successful pairs of music composers and song writers emerged over the years in Bollywood. For instance, Shankar Jaikishan successfully paired with Hasrat Jaipuri in Raj Kapoor’s ‘Barsaat’. They gave many more hits subsequently. Likewise, Khayyam too enjoyed working with Sahir Ludhyanvi and Kaifi Azmi. These were the songs that took Khayyam to the top rung of the Hindi movies’ musical ladder. However, the best of Khayyam was to come much later when he again teamed up with Sahir Ludhyanvi to give numerous soul-touching songs such like ‘Kabhi, kabhi mere dil me khayal aata hai’, ‘Mein pal do pal ka shayar hoon’, ‘In aankhon ki masti ke’ and ‘Ye kya jagah hai doston’, et al. However, my own favourite is ‘Dil cheez kya hai, aap meri jaan lijiye, bas ek baar mera kaha maan lijiye’ in movie ‘Umrao Jaan’ (1981) rendered by Asha Bhosle and picturised in Lucknow.
It is therefore natural that Khayyam should have preferred to work with poets-turned-lyricists. No wonder then he jelled very well with Sahir Ludhyanvi, Majrooh Sultanpuri, Ali Sardar Jafri and Naqsh Lyallpuri.
In the course of his iconic career, Khayyam won many accolades, national and international awards, besides numerous awards from the industry. He won the Best Music Director award on seven occasions for movies such as Umrao Jaan, Kabhi Kabhi, Razia Sultan, Noorie, etc. He was also given the Padma Bhushan award by the government. Despite all these honours, Khayyam retained his innate modesty and simplicity.
Khayyam had married Jagjit Kaur, a singer in her own right, in 1954. Their only son, Pradeep, unfortunately died in 2012. The couple set up the ‘Khayyam Jagjit Kaur Charitable Trust’ with the objective of helping musicians, artists and technicians in need.