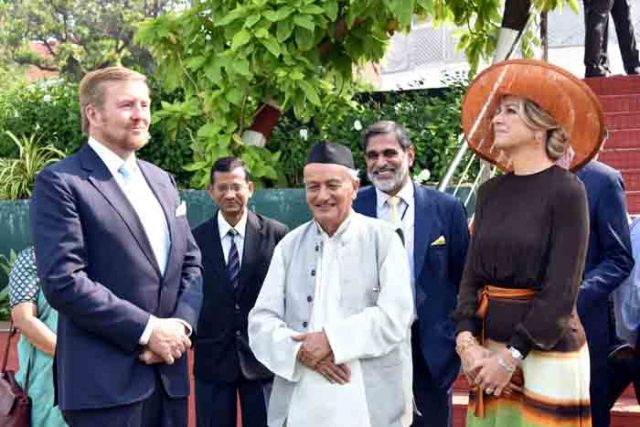 MUMBAI, 17 Oct: King Willem-Alexander and Queen Maxima of the Netherlands met the Governor of Maharashtra, Bhagat Singh Koshyari, at the sea-side Raj Bhavan, here, on Thursday. King Willem–Alexander told the Governor that India and Netherlands had a shared history of trade and cooperation. He said many Indian companies, especially those from the Information Technology sector, were operating from the Netherlands. The King said Netherlands has a large population of Indian expats who are making handsome contribution to the economy of his country. Issues of mutual cooperation in the areas of agriculture, horticulture, water and sanitation and climate change were discussed during the meeting. The King and Queen were accompanied by a high level delegation. The Governor told the royal dignitaries that Maharashtra is the most investment – friendly destination in the country offering avenues of cooperation in several areas. The Royal visitors are currently on a State visit to India at the invitation of President Ram Nath Kovind. They were accompanied by the Dutch Minister of Foreign Affairs, Stef Blok, and a high level official delegation. The visit is taking place from 14 to 18 October, and includes the cities of New Delhi, Mumbai and the state of Kerala. It will focus on key sectors like water technology, maritime development, healthcare, sustainable agriculture, social initiatives and cultural heritage. The State Visit has a broad parallel trade mission to India which is set to explore potential for further economic partnerships between both countries. Also visiting with the trade mission are the Minister for Healthcare, Bruno Bruins, and the State Secretary for Economic Affairs and Climate Policy, Mona Keijzer.