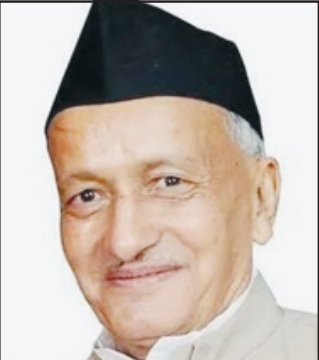 Dehradun, 6 Sep: For Maharashtra’s new Governor Bhagat Singh Koshyari, life’s journey from an obscure village in district Bageshwar to the Raj Bhawan at Walkeshwar, Malabar Hill, in Mumbai, has been a splendid one. Sworn-in as Maharashstra Governor just yesterday, the 77 year old Koshyari has seen several major ups and downs in his political career spanning several decades. It has been an incredible journey from being a school teacher and MLC in undivided UP to the post of CM of Uttarakhand and now as Governor of a state like Maharashtra. Among other things, he can be easily credited with being the major force behind the present strength of BJP as the top political party in Uttarakhand. Born in an ordinary family belonging to village Namti Chetabagad in district Bageshwar (then district Almora in undivided UP) in 1942, he was the ninth of his parents’ eleven children. He joined Rashtriya Swayamsewak Sangh (RSS) in 1966 and went on to become one of the tallest leaders in Uttarakhand. After completing his intermediate from Kapkot, which has been his political arena, he earned his Master’s degree in English Literature from Almora College, and was appointed as a lecturer in an Intermediate College in district Etah of UP. However, after some years, he quit his job and returned to Pithoragarh and it was here that he established the first Saraswati Shishu Mandir in 1977. He played an instrumental role in the spread of the Saraswati Shishu Mandirs in the state. Today, there are hundreds of Saraswati Shishu Mandirs in Uttarakhand, which have been producing good results in the secondary board examinations as compared to the government schools. A committed RSS worker, he chose never to marry and can be credited with making RSS a powerful organisation in Uttarakhand. He was among the Sangh leaders who were imprisoned during the Emergency and he was in Almora and Fatehgarh prisons from July, 1975 to March, 1977. The Sangh recognised his efforts towards strengthening the organisation and, in 1997, he was elected as MLC on the BJP ticket. After the formation of Uttarakhand (then Uttaranchal) in November 2000, he was made a cabinet minister and given the portfolio of Power under the chief ministership of Nityanand Swami. However, Swami did not survive long as CM and it was the turn of Koshiyari to be made CM. He was considered very close to LK Advani who was then Deputy Prime Minister. However, the BJP lost the first assembly elections in 2002 under his chief ministership, but he was made Leader of the Opposition and also went on to become state BJP chief during the time the party was in opposition. As the state BJP President, he led the party from the front and it won the 2007 assembly elections. However, his desire to become the CM again remained unfulfilled since the party chose to appoint former Union Minister BC Khanduri to the post. In the year, 2009, much against his wish, he was elected to the Rajya Sabha, a step that was made ostensibly to keep him away from Uttarakhand. He was given the BJP ticket to contest the Lok Sabha Election from Nainital-US Nagar seat, which he won by defeating the incumbent MP, KC Singh Baba. Though political observers and his followers were hoping that he would be made a union minister preferably over former minister BC Khanduri and former CM Ramesh Pokhriyal Nishank because Nishank carried a somewhat negative image then and Khanduri was over 75 years already, but he suffered another disappointment and remained an MP. As an MP, he was very active on issues of national importance and also made it a point to keep in touch with the electorate, unlike some of his fellow MPs from Uttarakhand. As the 2019 elections approached, he expressed his desire not to contest elections again and cited his age as the reason. But he worked hard towards ensuring a win for his protégé, Ajay Bhatt. Just as many of his detractors thought that he would just fade into oblivion, the party awarded him with a governorship and that too of such a politically crucial state as Maharashtra. Koshyari’s political career has been that without blemish although he certainly had an uneasy relationship with BC Khanduri and Ramesh Pokhriyal, the other two tall leaders in the Uttarakhand BJP. There are a few factors which distinguish him from other political leaders from the state. He can easily be credited with popularising the BJP and making it the party of the masses in Uttarakhand. He is the one who groomed protégés like Prakash Pant, Trivendra Singh Rawat and Ajay Bhatt, all of whom managed to carve a good political standing of their own and a good following, something that Khanduri and Nishank in the BJP and leaders like Harish Rawat could not achieve. He is the one, who despite personal differences with any party leader, always kept the interests of the party above personal interests. Undoubtedly, he is one political leader who had widest acceptability among the party cadres across the state and even among the masses. Other qualities that separate him from others in politics are his easy accessibility and a very simple lifestyle. He never carried an air of being a big leader and has remained one who can be easily approached by his supporters and others. His lifestyle is also frugal and very informal. Even as the CM, he had been very informal and easily approachable. Fond of simple food, Khichdi, in particular, he has never hesitated to travel long distances on foot in the remote hills of Uttarakhand, even at this age. He has had a sweet relationship with the media and has been fond of writing too. He also founded a fortnightly newspaper published from Kumaon, which is now managed by his brother.

Garhwal Post has established itself as a credible, balanced and forward looking newspaper in India. Based in Uttarakhand, the daily is read by the aware, socially and culturally responsible, high-income elite of society.
Contact us: info@garhwalpost.in
https://garhwalpost.in/kansas-city-hookup-sites/