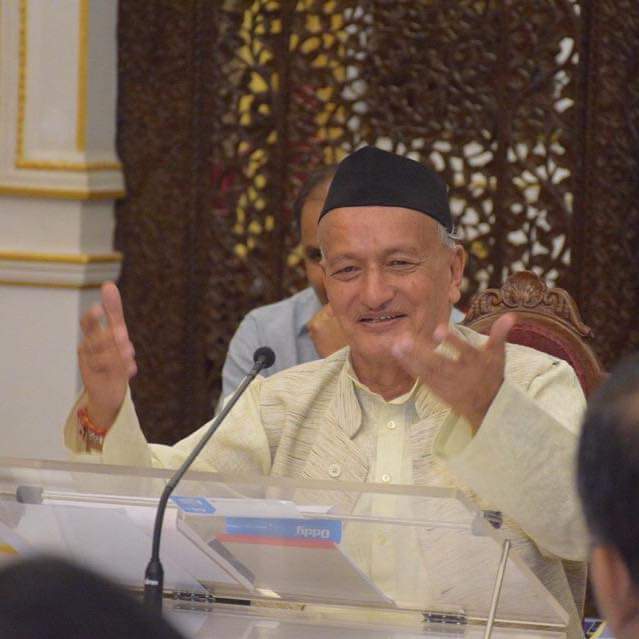 Mumbai, Feb 11 (IANS): In a huge embarrassment, the Maharashtra Governor Bhagat Singh Koshyari was prevented from using a state government aircraft to fly to Dehradun and then onto Mussoorie for an official function, airport sources said here on Thursday.
The incident happened at around 9 a.m. at Mumbai Airport when the Governor and his aide reached to take the state government aircraft to Dehradun.
However, there he was reportedly informed that there was no permission for him to take the flight, though the reasons are not clear.
Unfazed, Koshyari, who hails from Uttarakhand, and his aides immediately booked a scheduled commercial flight and left for Dehradun.
Garhwal Post adds: According to a press release from Mumbai Raj Bhavan, the Governor of Maharashtra and Goa, Bhagat Singh Koshyari, is scheduled to preside over the Valedictory Function of the 122nd Induction Training Programme of IAS officers at the Lal Bahadur Shastri National Academy of Administration at Mussoorie, at 10 a.m. on Friday.
In this connection, the Governor was scheduled to depart from CSIM Airport Mumbai for Dehradun at 10 a.m. on Thursday. In preparation of the visit, the Governor’s Secretariat had written to Government of Maharashtra authorities seeking permission for the use of Government Aircraft well in advance on 2 February. The office of the Chief Minister was also informed.
Today, the Governor reached the CSIM Airport and boarded the government plane. However, he was informed that the permission for the use of Government Aircraft had not been received. At his instructions, tickets for Dehradun were booked for the Governor on a Commercial Aircraft leaving Mumbai at 12:15 p.m. immediately and accordingly, he left for Dehradun.
When Koshiyari reached Dehradun and was asked to comment on the incident, he refused to make an issue of the same adding, however, that he boarded another plane when the state plane was not made available to him.
Ever since the Shiv Sena, Congress and Nationalist Congress Party (NCP) formed the government in Maharashtra in 2019, the Thackeray-led government has been at loggerheads on a host of issues with the governor. However, today’s incident can be termed not merely as another dramatic turn of events but a deliberate attempt to embarrass the constitutional office of the governor by the state government.

Maharashtra CMO denies allegations
Mumbai, Feb 11 (IANS) Even as a massive political slugfest erupted between the ruling Maha Vikas Aghadi (MVA) and Opposition Bharatiya Janata Party (BJP) on the issue of Governor Bhagat Singh Koshyari being denied use of the state plane, Chief Minister Uddhav Thackeray’s office broke its silence on Thursday evening and pointed fingers at the Raj Bhavan.
The CMO said the government had informed Raj Bhavan on February 10 (Wednesday) that permission for the official plane had not yet been granted and, thereafter, the Governor’s secretariat should have properly enquired about the availability of the government aircraft.
Taking serious note, the CMO has directed that “responsibility should be fixed” on the Raj Bhavan staffers concerned for the lapses which resulted in an embarrassment to the Governor.
Declaring that the government had not erred in the matter, the CMO countered why the Raj Bhavan secretariat did not confirm the issue of permission before putting an eminent person like the Governor in such an awkward situation.
“After being informed by the CMO a day in advance, the Raj Bhavan secretariat was expected to confirm the clearances before making arrangements for the Governor to go to the airport. Since this was not done, the Governor was unable to travel to his intended destination in the government aircraft,” the CMO said.
Deputy Chief Minister Ajit Pawar, when asked on the matter, said he was not aware of the developments but would enquire with the concerned officials in Mantralaya before commenting.
Shiv Sena Chief Spokesperson and MP Sanjay Raut said that he had spoken with the CM and “rules were followed by the government”, without elaborating.
Other senior Sena leaders like Industry Minister Subhash Desai and Transport Minister Anil Parab, Nationalist Congress Party leaders like Chhagan Bhujbal and others largely feigned ignorance, while Congress’ Mumbai Guardian Minister Aslam Shaikh said, “we respect the Governor and he cannot be insulted,” but wondered if there were any technical issues or the ATC process was not completed in the matter.
Several BJP leaders slammed the MVA government with the Leader of Opposition (Assembly) Devendra Fadnavis saying: “What has happened is indeed unfortunate The Governor is not a person, the Raj Bhavan is a Constitutional post. I have never seen such an egoistic government.”
Others who attacked the Shiv Sena-Nationalist Congress Party-Congress included state BJP President Chandrakant Patil, Leader of Opposition (Council) Pravin Darekar, city and state spokespersons, MPs and MLAs.