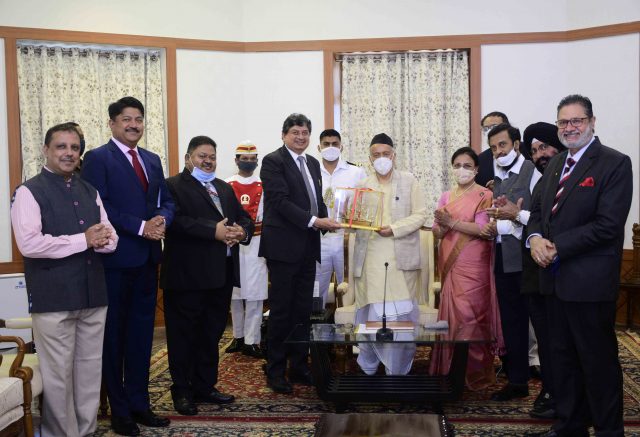 Mumbai, 31 Mar: The Governor of Maharashtra and Goa, Bhagat Singh Koshyari, inaugurated the State Level celebrations of the Merchant Navy Week at Raj Bhavan, Mumbai, on Wednesday.
The programme was organised by the National Maritime Day Celebrations Committee.
Director General of Shipping and Additional Secretary to the Government of India in the Ministry of Ports, Shipping and Waterways Amitabh Kumar pinned the first miniature flag of the Merchant Navy on the Governor’s jacket.
Stating that India has been a great maritime nation since ancient times, Governor Koshyari said the maritime sector has tremendous opportunities for growth in the coming years, especially in tourism. He said the sector can generate a large number of employment opportunities for people. Mentioning that the Prime Minister has been attaching great significance to the maritime sector, he called for collective efforts to realise the goals of the India Maritime Vision 2030.
Amitabh Kumar informed the Governor that the main objective of the Merchant Navy Week is to highlight the role of Indian shipping in the nation’s Export and Import trade and to disseminate information about Merchant Shipping through various media. He said the Week culminates on 5 April, which is celebrated as National Maritime Day.
The National Maritime Day is celebrated in India to commemorate the maiden voyage of the first Indian flag merchant vessel SS Loyalty (then owned by Scindia Steam Navigation Company) from Mumbai to London on 5 April 1919.
Additional Director General Shipping Kumar Sanjay Bariar, Chairperson and Managing Director of Shipping Corporation of India Harprit Kaur Joshi, Deputy Director General Dr Pandurang K Raut, Shipping Master Mukul Dutta, Chairman of National Maritime Day Committee Atul Ubale, Chairman of Maritime Association of Shipowners, Ship Managers and Agents (MASSA), General Secretary of National Union of Seafarers of India, NUSI, Abdul Gani Serang and General Secretary of Maritime Union of India Amar Singh Thakur were among those present on the occasion.