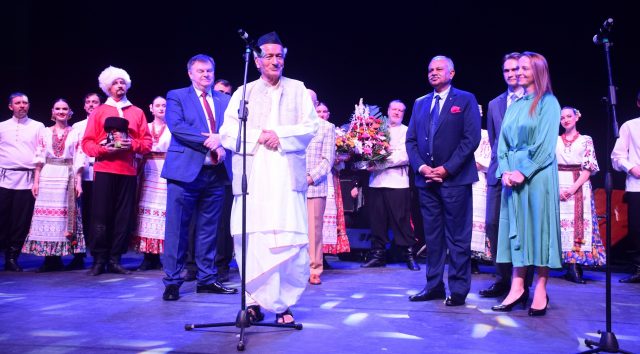 Mumbai, 29 Nov: Maharashtra Governor Bhagat Singh Koshyari inaugurated the Festival of Russian Culture in India on the occasion of the completion of 75 years to the establishment of diplomatic relations between India and Russia at the Royal Opera House here on Monday.
A Music, Dance and Martial skills ensemble, ‘Krinitsa’, was presented by a group of Russian folk artists, Cossacks, on the occasion.
Addressing the gathering, Governor Koshyari said even though the diplomatic relations between Russia and India are 75 years old, the two countries have had cultural and trade exchanges dating back to several centuries. He said he had read the works of Russian writers Maxim Gorky, Leo Tolstoy and Anton Chekhov and described their literary work as all time great, comparable to Ramcharit Manas and Gyaneshwari.
The Governor said India and Russia share a strong bond of political, economic and strategic partnerships and added that growing cultural exchanges will further strengthen these relations. The Governor said he was happy that Raj Kapoor was popular in Russia and, in the present era, Yoga is gaining popularity there.
The Governor complimented the Russian Consul General in Mumbai, Aleksei Surovtsev, for giving his entire welcome speech in Hindi.
The Governor complimented the Director and artists of ‘Krinitsa’ for the beautiful presentation and invited them to Raj Bhavan.
The Russian Festival of Culture was organised by the Ministry of Culture of Russia, Consulate General of Russia in Mumbai in association with the Indian Council of Cultural Relations and the Royal Opera House, Mumbai.
Flag Officer Commanding in Chief of Western Naval Command Vice Admiral Ajendra Bahadur Singh, Vice Consul of Russia in Mumbai Georgii Dreier, Western Regional Head of ICCR Anurag Singh and Honorary Director of Royal Opera House Ashish Doshi were also present. 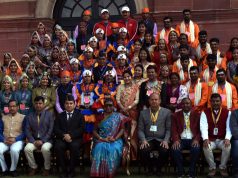 Have expressed desire to step down from Governor’s Post: Koshyari

Wordsmiths on the Prowl

Garhwal Post has established itself as a credible, balanced and forward looking newspaper in India. Based in Uttarakhand, the daily is read by the aware, socially and culturally responsible, high-income elite of society.
Contact us: info@garhwalpost.in
https://garhwalpost.in/best-dating-sites-uk-for-over-50/