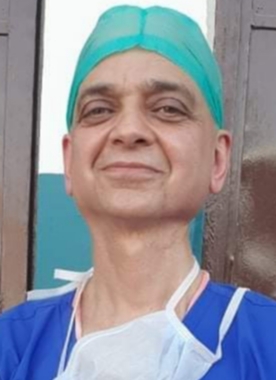 Dr Nitin Pandey
Dehradun ,3 Oct: October continues to throw up new mysteries and new challenges as it goes around the Earth. The much feared second wave in United Kingdom has started abating within a week of it hitting the island nation  with
minimal increase in admissions or deaths, but in Spain the second wave has generated a huge surge in hospital admissions and deaths, hospitals in Spain are again full. The reason for this difference is hard to explain at present. The biggest news however, this week, was the US President testing positive for Coronavirus, after traveling in AirForce One with an infected aide on an election trip. It is said that the aide, Hope Hicks, sat alone at the rear of Air Force One and exited from a different door. If the most protected person on this planet, traveling in the most secure aircraft in this
world caught coronavirus in that flight, then the importance of the humble mask can never be underestimated, in any environment. US, in the meantime, continues to lead the world in the total number of cases and the total number of active cases, with India fast catching up, leaving Brazil a poor third. But India leads the world in the maximum number of recovered cases. Even though we are number 3 in the total number of deaths in the world, the first two being US & Brazil, but if we remove the population from consideration, and consider the number of deaths per
million, India has gone from being No 72 two weeks ago
to number 78. US is number 10 on that list and Brazil 7. The country at the top of death rate per million is San Marino, a micro nation in Italy, with a death rate of 1,237 per million.
A study in Andhra Pradesh & Tamil Nadu, which traced 5,75,000 people from 84,965 cases, found that the risk of secondary spread, an infected person spreading the virus, is much higher among occupants of shared
vehicles during travels of six hours or longer than among people within the same households. Chances of picking up an infection from a person with coronavirus were 1.2% in community health settings, 2.6% in community, 9% within households and a whooping 79% in same vehicle for 6 or more hours. Published in the US Journal of Science, the study again label asymptomatic children as super-spreaders. It said that just 20% of patients spread the virus to 80% of secondary
cases. Why children and some patients are super spreaders is still unknown, but the fact that 80% of persons who are positive do not spread the virus, makes an interesting debatable point. Another
puzzling piece of news was that in Delhi, a sero survey by the government, has revealed that the immunity levels among the general population have declined from 28.7% in August to 25.1% in September, which is reverse of what is expected, as more and more people get
exposed to the virus one expects the general immunity levels to go up.
On the national front, the good news is that newer cases have been less than recovered cases over the last week, the trend being most evident in Maharashtra, the state most hit by the Pandemic. At 83.4% recovery rate,
one would tend to believe, that the peak is almost
over, but whether we have crossed the peak, only time will tell. The Case Fatality Rate also continues to decline, from 1.76% last month to 1.56% in September, one of the lowest in world. Uttarakhand has been
mirroring the National pattern, with new cases and active cases substantially down. The much feared
surge after Unlock 4 did not materialize. Thankfully our testing levels have improved this week in Uttarakhand, leveling to approximately 10,000 per day, which is fairly
decent. In the end, I would like to pay my tributes and tributes on behalf of everyone in Dehradun to two
leading doctors we lost to COVID-19 last week, Dr Manju Kala and Dr G.S. Jadon. Both were extremely hard working and we’ll known doctors in our city and kept working through out the Pandemic, putting their own lives at risk. May God Bless their souls.
(Dr Nitin Pandey is a Dehradun based ex Indian
Air Force doctor, a Pediatrician and an active Social worker.)

Garhwal Post has established itself as a credible, balanced and forward looking newspaper in India. Based in Uttarakhand, the daily is read by the aware, socially and culturally responsible, high-income elite of society.
Contact us: info@garhwalpost.in
fast and furious 9 stream date https://garhwalpost.in/hookup-scotland/