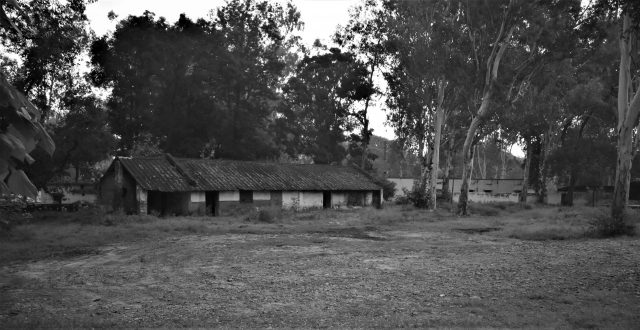 I was not born in Clement Town. Neither do I think, I will die there. But beyond the realm of being born and dying – Clement Town holds for me, the strongest memories.

It’s difficult to write about Clement Town because there are too many layers that envelop it. It’s painful to peel them off – one by one. Only a few barracks and crumbling bungalows in their original form remain and almost all the residents of a generation before mine have died. Whenever I go there, I feel more or less like a stranger, or more appropriately – an orphan. For a newcomer, it is now a regular town with the normal clutter of shanties, hustle and bustle, where cars jostle for space with cycles, motorcycles, buses and scooter rickshaws.

But the Clement Town I grew up in was not like that …
My father chose to settle down in Clement Town primarily because of its beauty and weather. Nestled in the Doon Valley, it was surrounded by hills on all sides. It had plenty of forests and a number of fresh mountain streams. The birds chirped incessantly, the bushes were lit up by fireflies in the evening, and butterflies hovered around the sweet peas.

It was inhabited by a sprinkling of Britishers who tried to create a mini English County there.

No one could buy land in Clement Town except through the British Anglo Indian Society established in 1912 under the Cooperative Societies Act. My father bought the present property from one Mr Jack Lumsden, who was an Import Officer at London Airport.

On one of my trips to England, I tried to trace the ancestry of Mr Lumsden from the address he wrote on the sale deed –“1, The Pinner, Middlesex, England”. I found that there used to be a bookshop there by the name of ‘Lumsden Bookstore’. It seems that the Lumsdens had come to England from Glasgow, Scotland. The bookshop no longer exists.

Why did I go searching for Mr Lumsden’s ancestary? Because his sister, Miss Lumsden, was as close to us as a non-biological mother could be. She was a spinster and used to come home every Sunday, till she could hardly walk. She was my father’s patient and occupied a beautiful house which now houses the rather commercial looking Graphic Era. She would always bring something along with her – chocolates, cookies, sometimes, a pack of cards to entertain us. She would spend the whole day and just watch all of us. When my mother passed away, I remember her coming to our house slightly late. She had suffered a heart attack, but she trudged slowly and embraced each of us.

‘You need to be brave .Your mother would expect that from you. When a mother departs – even young children have to grow up,” she had counseled me as I wept inconsolably. Hearing those words – I suddenly grew up. At that time, I was not even 15 years old!! I can still feel her frail, stooping and shrinking frame. She had been a school teacher and often told us of her exploits on the hockey field in Spain!!

Thank you Miss Lumsden for making a man out of a boy – albeit a bit too early. Your words stuck in my mind. They could only come from a great teacher.

There were many other Britishers and Anglo Indians in Clement Town in the ‘60s. There were the Murray sisters, Mr and Mrs Monk, Mr Flaskett, Col Adams, Dr Laurent and many more.

In particular, we were very fond of a Scot called Mr Sweeney, because he was a delightful storyteller. My childhood friend Vinod Negi has a lovely tale which he shared with me.

I quote, “I loved going with Dr Laurent to Mr Sweeney’s house, as he would tell us stories of shikaar (hunting) and battle fights. Once, we were about to complete our visit and were standing and saying our goodbyes, when suddenly Mrs Norah Sweeney said, “Sit down brother. Coffee is coming.”

Dr Laurent turned around and said, “Sister, we have to leave now – it is getting dark and please do not inconvenience yourself.”

Dr Laurent sighed and sat down and we all settled in…
Just then, in walked Brother Coffey, the Irish gentleman who was the legendary Principal of St Joseph’s Academy”!! (Unquote).

What is perhaps not too well known is the fact that Clement Town was a major Internment Camp for detained German, Austrian and Italian Prisoners of War. One of these barracks housed the famous Heinrich Harrer, who after several failed attempts escaped into Tibet crossing high mountains. Here he became the tutor of the present Dalai Lama. Harrer wrote a very interesting book called “Seven Years In Tibet”, which became the basis of the blockbuster Hollywood film which starred Brad Pitt! Later, in 1948, the barracks became the predecessors to the academy at Khadakvasala – it housed budding cadets and some of them rose to the top echelons of the Indian Armed Forces.

The memories of the barracks, the residents, the picnic spots, the lake, the Victory and Army Cinema Halls, the bungalows… refuse to go away, no matter how hard I try. Some moments follow you like a shadow. You can’t get away from them even if you try.

(Kulbhushan Kain is an award winning educationist with
more than 4 decades of working in schools in India and abroad. He is a prolific writer who loves cricket,  travelling and cooking. He can be reached at
kulbhushan.kain@gmail.com)