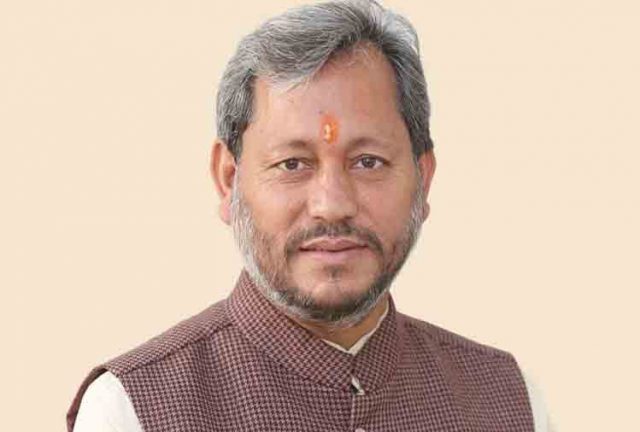 By Arun Pratap Singh
Dehradun, 13, Apr: Chief Minister Tirath Singh Rawat has yet again made a controversial remark. Rawat said, on Monday, that it was not right to compare the Markaz congregration with the Kumbh Mela. He was responding to a question on the risk of spreading Covid infection at the Kumbh Mela in Haridwar. The Chief Minister was answering the queries of journalists at a virtual press conference. He offered the reason why the two events were not comparable. He said that the large number of participants at the Markaz slept in the same hall for several days. He claimed that the Kumbh, on the other hand, was not limited to Haridwar only. The Kumbh Mela area extended from Rishikesh to Neelkanth region and Haridwar. There were 16 ghats for bathing. The seers and devotees were bathing in the river at different ghats and at different times. On the other hand, participants in the Markaz were staying together and even shared the quilts. The arrangements at the Kumbh are totally different and care is being taken to ensure implementation of Covid guidelines.
He claimed that the second Shahi Snan for the seers and for the common devotees had been managed quite successfully with piety and grandeur and, during this, the guidelines were followed effectively. He thanked all those involved for their role in ensuring a safe and successful event.
He said that the seers from various akharas as well as lakhs of devotees had taken the holy dip in the Ganga on Monday.
The CM admitted that there were many big challenges in organising the Kumbh under the adverse conditions of the Corona pandemic but the government and the administration accepted the challenge and had ensured that it was hosted safely and smoothly. Every need of the seers was being taken care of and they had been given a warm welcome at the Mela. Besides that, the administration had been directed to strictly ensure implementation of Covid guidelines and that the devotees did not face any trouble.
Rawat further claimed that the seers as well as the devotees appeared satisfied with the arrangements made by the state government. He expressed the hope that the with the blessings of Badri Vishal, Baba Kedar and Mother Ganga, all the remaining Shahi Snans would also be successfully completed.
He said that, during the third Shahi Snan, the state government had made a round-the-clock arrangement to ensure that the seers and devotees did not face any kind of inconvenience. The bathing time at every Ghat had already been set in order to ensure smooth and safe arrangements. He also claimed that the security personnel, sanitary staff, medical staff and others were doing their work with full efficiency.
The Chief Minister requested all the pilgrims coming for the third Shahi Snan to follow the guidelines set by the Government of India regarding Covid. All devotees needed to wear masks, maintain social distance and also keep the hands sanitised from time to time.