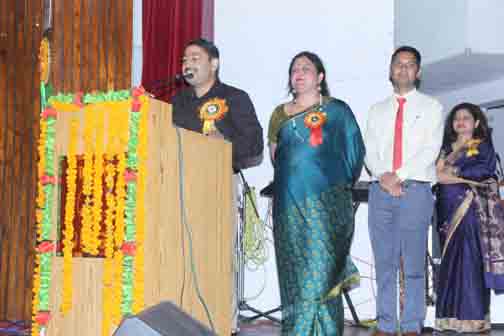 DEHRADUN, 12 Sep: KV ONGC held its Annual Day Celebration, here, today. Ashok Kumar, DG (Law and Order), was the Chief Guest. His wife, Alaknanda Ashok, Director, WIT, was also present, as was RR Dwivedi, General Manager and nominee Chairman. Principals of other Kendriya Vidyalayas of Dehradun region and many other dignitaries along with parents participated in huge number. The programme began with lighting of the ceremonial lamp by Chief Guest Ashok Kumar, Alaknanda Ashok, RR Dwivedi, Principal Dr Anshum Sharma Kalsi, KV ONGC, along with the other dignitaries. They were all presented a ‘Green Welcome’ by the Principal. The array of cultural programmes was ushered in by the rendition of ‘Saraswati Vandana’ followed by a soul stirring musical ensemble in the form of a Welcome Song. The Principal presented the Annual Report, tracing the achievements and the progress made by the school in the previous academic session and laid a roadmap for the future. The cultural events left the audience spell bound. A Garhwali Dance based on the legend of “Nanda Devi” stole away the hearts of each and every one. An enthralling action song was presented by the tiny tots to save the Ganga. The vibrant Kalbelia Dance left the audience mesmerised. The main attraction of the programme was the “Prize Distribution” at which the achievers of the previous session in academics, CCA, sports, scouts and guides, ‘Ek Bharat Sreshth Bharat’ and various other fields were felicitated. This was followed by teachers’ rewards and recognition. Twenty teachers of the school were felicitated for achieving the target of 100% result and a PI above 70, thus taking KV ONGC to heights of success. Chief Guest Ashok Kumar congratulated the school and all the toppers for their academic excellence and encouraged them to excel in future as well. The vote of thanks was proposed by Abhilekh Pilkhwal, Vice- Principal.