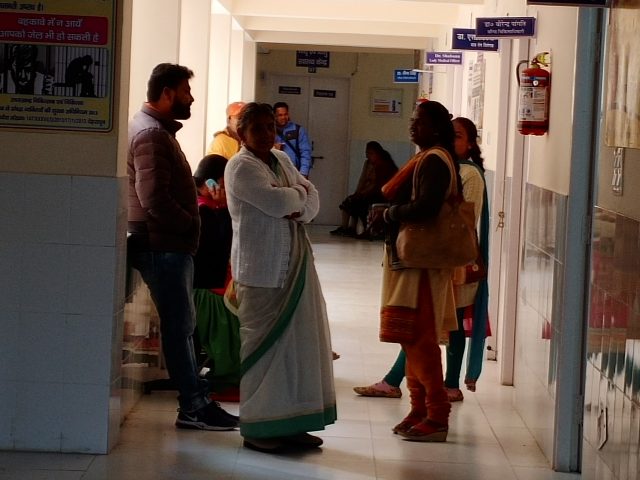 Mussoorie, 21 Nov: The only government civil hospital in Mussoorie is unable to provide health facilities to locals and the tourists. The newly constructed hospital was inaugurated by CM Trivendra Rawat on 6 March, 2019, but, unfortunately, the health department has forgotten to provide the necessary health services. The hospital is being operated by just a few doctors and staff, due to which patients from Mussoorie and nearby areas are facing lots of problems.
It has been about 8 months since the hospital was opened, but it is seeing a huge lack of basic facilities. The pathology lab of the hospital functions with old machines, while the operation theatre has no machines or equipment. Due to lack of medical facilities, the hospital has only emergency facilities with one doctor after 2 p.m.
The local people complain that the government and Mussoorie MLA Ganesh Joshi talk big about health, but nothing is visible on the ground. At the present, all the promises of the government are proving to be false. They have demanded a hospital with all medical facilities with recruitment of more doctors and staff so that they could properly benefit.
MLA Ganesh Joshi said that the government is operating various schemes to provide health facilities to the people. The Mussoorie Civil Hospital had been renovated and, soon, the basic facilities in the hospital would be fully provided. He said that the budget had been approved by ONGC for various types of equipment in the hospital and would be provided soon.
Mussoorie Congress President Gaurav Aggarwal said that there was a lot of difference between the statements and actions of the State Government. He said that, if the government did not soon provide doctors and staff with all the health facilities in the civil hospital, his party would launch a major protest.
CMS Dr Rajeev Pal of Civil Hospital said that continuous work is being done to better operate the hospital and soon all kinds of facilities would be made available.