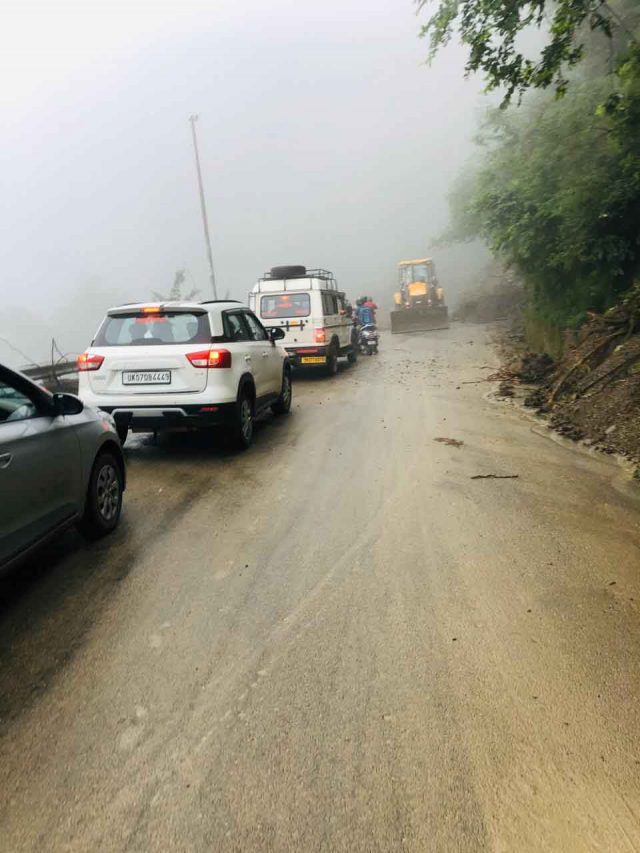 By Our Staff Reporter
Mussoorie, 12 Aug: The Mussoorie-Dehradun road was blocked due to a heavy landslide near Kolukhet. The Public Works Department had to make a lot of effort to open it. During this period, long queues of vehicles resulted on both sides of the road. People had to face a lot of problems due to the blocked road.
After the landslide, the PWD officials took about an hour to clear the debris and boulders on the road with the help of JCBs. PWD Assistant Engineer Pankaj Agarwal said that about 3 metres of the hillside is being cut to widen the road. The Mussoorie Dehradun road has been closed from 7 p.m. to 7 a.m. for all vehicles except emergency vehicles.
Mussoorie Police Station In-charge Devendra Aswal said that the route has been closed by PWD for widening of Mussoorie Dehradun road, and commuters are being returned from Kolukhet and Kothal Gate on both sides.
He revealed that late on Tuesday night, the road was closed near Kholukhet after a landslide. A 108 ambulance transporting a pregnant woman to Dehradun, and the police had to intervene to clear the debris with the help of JCB. Eventually, the woman was sent on to the hospital.