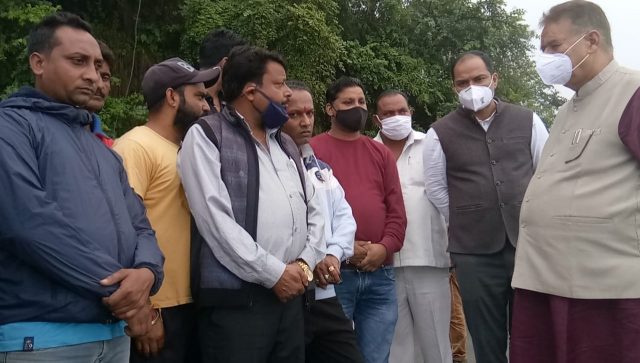 By Our Staff Reporter
Mussoorie, 29 Aug: Debris entered three houses following a landslide that took place near the Mussoorie Petrol Pump due to rain late on Saturday night. All three houses were completely damaged; the residents managed to escape in time and save their lives.
Cabinet Minister and Mussoorie MLA Ganesh Joshi took stock of the disaster-hit area and directed the administration to give proper compensation to the victims’ families at the earliest. One person suffered minor injuries. The officers and employees of the Electricity Department, who reached the spot, removed the electric pole that had been hit by the landslide for people’s safety. As soon as information about the incident was received, Minister Joshi reached the spot and took stock of the affected areas and assured all possible help to the families of the victims. He directed SDM Mussoorie Manish Kumar to immediately give proper compensation to the families. Ganesh Joshi said that as the houses belonged to the Municipal Council, these should be repaired immediately. The administration has also been instructed to make arrangements for boarding and lodging of the affected families.
While stating the government is fully geared up to counter disasters, he assured that damaged roads would also be repaired soon. The administration and public works department were working continuously to clear the landslide that took place near the Galogi Power House on the Mussoorie-Dehradun road. Treatment of the hillside would also be undertaken.
Among those present were SDM Manish Kumar, Naib Tehsildar Dinesh Dobhal, SDO, Electricity Department, Pankaj Thapliyal and Mussoorie BJP President Mohan Petwal.