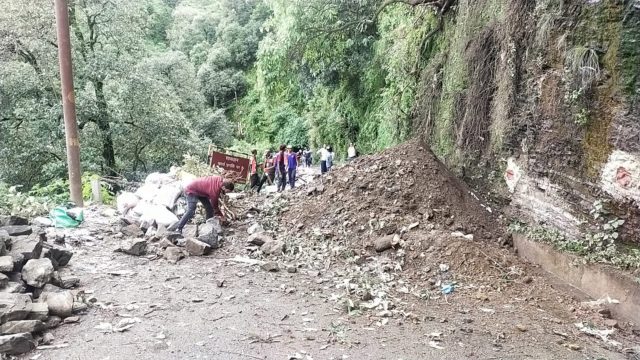 MUSSOORIE, 11 Aug: In the Queen of Hills, Mussoorie, normal life was disturbed due to heavy and continuous rains through the night and this morning. As a result, Mussoorie Tehri Bypass Road was closed after a landslide near National Highway 707A, near Laxmanpuri. At the same time, due to landslide near Mussoorie Hathipaon Road at Dhumanganj, the road was also closed due to falling debris and stones, causing great difficulty to the people in to and fro movement.

Due to the closure, people coming from Mussoorie towards Dhanaulti Tehri had to face huge inconvenience due to heavy rains in the night. Due to the closure of the road in Mussoorie, a long queue of vehicles was witnessed on both sides of the landslide site.

Once the information was received about the closure of Mussoorie Tehri Bypass National Highway 707A, the officials of Mussoorie Administration and National Highway reached the spot along with the teams and started working to clear the debris and stones on the way with the help of JCB machines. After continuous work towards removal of debris and the stones for more than two hours, the road was finally cleared for vehicles.

On the other hand, the debris and stones that came on the road near Mussoorie Hathipaon Dhumanganj were removed by the teams of Public Works Department (PWD), and the road was finally opened for small vehicles only. The road remained closed however for bigger vehicles as the road could not be fully cleared of the debris and falling stones by the time the report was filed. Officials confirmed that it was likely to take longer to clear the road of big stones that had fallen on the road. In addition, Police force has been deployed on both the routes by Mussoorie Police to clear the traffic. Due to the closure of National Highway 707A, traffic from National Highway 707A was for some hours diverted to the main market of Mussoorie, leading to Mullingar Chowk in Mussoorie. This naturally led to big jam in Mussorie city and the Police had to work hard to deal with it.

Garhwal Post has established itself as a credible, balanced and forward looking newspaper in India. Based in Uttarakhand, the daily is read by the aware, socially and culturally responsible, high-income elite of society.
Contact us: info@garhwalpost.in
where do singles meet near me singles day airpods