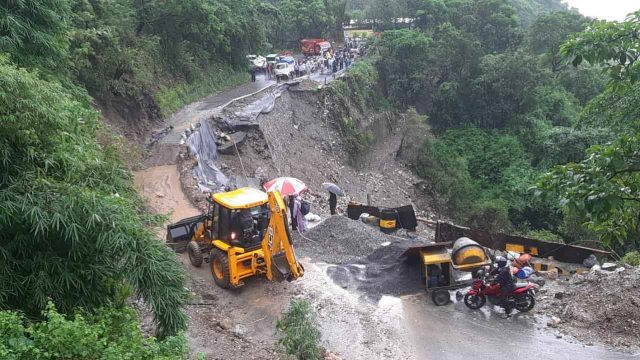 By OUR STAFF REPORTER
Mussoorie, 19 Aug: Life here has been completely disrupted due to continuous rain since this morning. Heavy landslides took place at many places on the Mussoorie-Dehradun Road. People faced a lot of problems as the road was blocked by debris, leading to long queues of vehicles on both sides of the road.
The PWD worked continuously with JCBs to clear the road but due to the continuous landslides, it faced a lot of problems. The Mussoorie- Dehradun Road was blocked for nearly 2 hours due to heavy landslides near the Kolukhet Water Bend, which caused a jam of about 2 kms on both sides.
Recently, due to heavy rains in Mussoorie, about 70 metres of the road near Kolukhet was damaged due to landslide, while the road above it was also damaged on Wednesday. In the event of further rain, the road above can also be further damaged, which would completely disrupt the Mussoorie Dehradun traffic. Near the Galogi Power House, a heavy landslide occurred and doctors of Mussoorie sub-hospital, who were going to Dehradun by two vehicles, had a narrow escape.
On the Mussoorie Tehri Bypass also there have been landslides at many places and traffic obstructed. All the roads were cleared by late evening by JCBs of the Public Works Department and National Highways Authority.
Mussoorie SDM Manish Kumar said that, due to landslides at several places on the Mussoorie Dehradun Road, the situation was very dangerous at some places. Hence, an action plan would be devised to clear the route with the officials of departments concerned and the police. He said that, earlier, there was talk of cutting and widening the mountain along the damaged part of the road, but now the road above the damaged road, too, is getting damaged. He said that vehicles were being taken out one by one on the damaged route and police teams have been deployed on both sides of the route.

Garhwal Post has established itself as a credible, balanced and forward looking newspaper in India. Based in Uttarakhand, the daily is read by the aware, socially and culturally responsible, high-income elite of society.
Contact us: info@garhwalpost.in
famous dating apps https://garhwalpost.in/hooking-up-in-san-antonio/ https://garhwalpost.in/wealthy-women-dating/