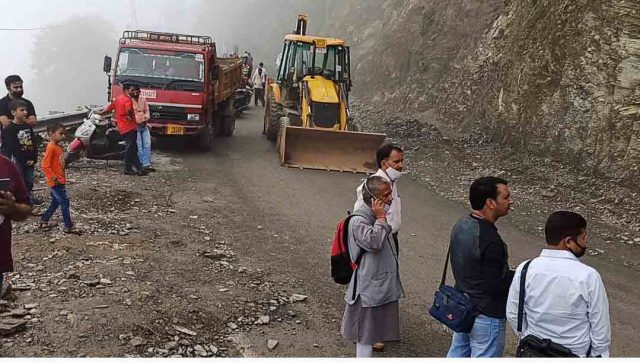 By OUR STAFF REPORTER
Mussoorie, 31 Aug: Due to frequent landslides and stones falling on the Mussoorie Dehradun Road, the police and administration have imposed a ban on the movement of tourists and people beyond Kuthal Gate. Due to frequent landslides, the route could not be opened till late evening. The road was closed from 9 p.m. on Sunday.
People, putting their lives at risk, went on the Mussoorie Jharipani- Kolukhet route, which is not free from danger. This road too was closed for some time by the police in view of increasing traffic and potential danger. As a result, people coming to Mussoorie from Dehradun had to face many problems. Removal of debris and stones on the road near the Kolukhet Galogi Power House is being done with the help of JCBs. Locals said that the hills had been cut by the Public Works Department to widen the Mussoorie Dehradun Road, but owing to sub-letting of contracts, it was done in a non-technical manner, destabilising the slopes. People have demanded that action be taken against the officials appointed to get the work done, as well as the contractor.
SDM, Mussoorie, Manish Kumar said that due to the continuous slide, there was a problem in removing debris and stones from the road, but it was ongoing.