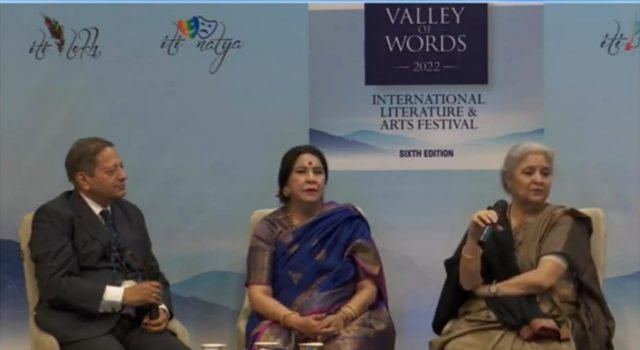 Dehradun, 13 Nov: On the second day of the Valley of Words Literature Festival, a session was held with a VoW Awardee in the Phoolwari Hall of Hotel Madhuban, here, today.

In the Chair was Sharmila Bhartarian, Odissi dancer, vocalist and theatrical performer, a winner of numerous awards. Following the introduction of the Chair, the main speaker of the session, Ira Pande was called. VoW Curator Dr Sanjeev Chopra was also introduced and called to the stage.

Before commencing with the session, Sharmila presented a few steps of Odissi dance, hence, opening the session. Dr Chopra expressed appreciation of the book, ‘Amader Shantiniketan’. The book was written by Ira’s mother, Shalini. “It has been 60 perhaps 65 years since my mother wrote the book,” she recalle. Pande, herself, has never been to Shantiniketan. She shared some anecdotes as she recalled her mother.

She said that the former part of the book is a tribute to her Gurus. She recalled how her mother met new people and had interesting experiences. The book ends with the demise of Rabindranath Tagore. She emphasised, “Languages are bridges to cultures,” thus indicating how important language is to culture.

Dr Sanjeev asked, “Why do we lose our institutions?”

“These are all centred on one central personality, we don’t groom people, we think we’ll always be here,” Pande replied.

During the latter part of the conversation, when asked, “How do you feel having written such a wonderful book?” Pande said, “I’m just a translator, the author of the book will always be my mother. I’ve never been to Shantiniketan, I have not met such amazing and charismatic people, I have not lived through her days.”

As the session neared its end, the guests answered questions from the audience. The session ended with a closing dance performance by Sharmila Bhartarian.

Garhwal Post has established itself as a credible, balanced and forward looking newspaper in India. Based in Uttarakhand, the daily is read by the aware, socially and culturally responsible, high-income elite of society.
Contact us: info@garhwalpost.in
women dating up canadian online dating sites https://garhwalpost.in/online-hook-up-sites-free/