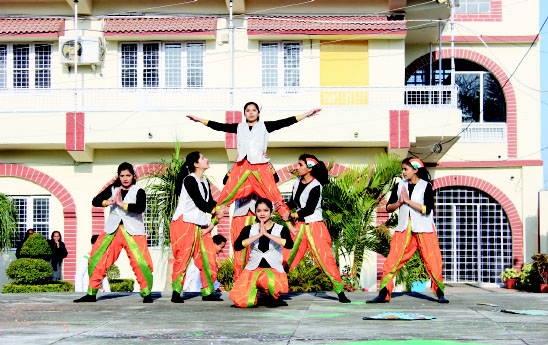 By OUR STAFF REPORTER
DEHRADUN, 27 Jan: The 70th Republic Day was celebrated at Hilton’s School with solemnity and pride. The programme began with hoisting of the National Flag by the Principal, DJ Hilton and was followed by singing of the National Anthem.
A dance to the track ‘Maa Tujhe Salaam…’ was performed by the girls on the theme of unity. Patriotic songs ‘Kitna Sunder Kitna Pyara Desh Hamara’, ‘Ae Watan, Watan Mere’ and ‘Kar Chale hum fida…’ was presented by the choir and the school band.
Senior students Kamiya Khanduja and Aanchal Gupta, in their speeches in English and Hindi, recalled the sacrifices of the freedom fighters during British rule, and also praised the advances made by the nation in various fields since Independence.
Shweta Gupta from Akhil Bhartiya Mahila Ashram was presented useful items contributed by the students for the girls of the ashram.
The Principal highlighted the significance of Republic Day and paid rich tribute to the sacrifices of the freedom fighters and framers of the Constitution. He encouraged the students to be patriotic and become responsible citizens of the nation. He emphasised self-discipline and good values, keeping in mind the needs of the country. He stressed that the country must remain united and peaceful for prosperity and development.