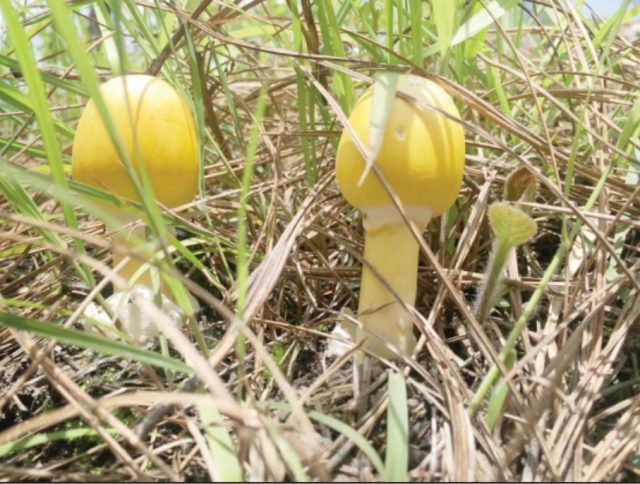 A wild mushroom adventure in Uttarkashi this monsoon, aided by the expertise of some local talents, opened a new world of biodiversity for me. It all started in Uttarkashi this July, where a friend and I were spending some happy hill time. I saw a muddy bundle of yellow, dangly cheuns kept next to the stove one rainy afternoon. I found out cheun is pahadi for wild mushroom, as the local flora and fauna expert Ranbir Singh Panwar put it. He had ventured out to the lush monsoon hillside for a quick pre-lunch pluck and come back with a triumphant bowlful. He made a quick stir- fry sabji to go alongside our dal- bhat, and viola: these were the best mushrooms I had ever laid tongue on. I accompanied him for the next pluck in the capacity of an apprentice. He signaled to me to follow closely as we approached a wet patch of grass and wildflower. “The moisture nourishes them,” he said and made a determined dive into the patch, parting the grass and then combing the carpet of wet pine needles with his bare hands. “Look,” he said. A spot of yellow emerged from beneath the brown needle bed. Then another clump was discovered. The long yellow cheuns we had been having are locally known as ‘Kanel’ cheuns, Panwar told us. There are other edible varieties, too. Panwar showed us a tall, white, umbrella like cheun. “This one’s called Peetha Chattri,” he said, after which he folded it like a paan and had it straight up. Somewhat emboldened by his action, I too tried a bit; it was delectable. Having got an adequate primer on wild mushrooms, we planned for a more ambitious treasure hunt. We would climb Naga, the mountain hanging over Nald village, about 7-8 kms from Uttarkashi town. We had been cheun-hunting in the pine forest around Nald all this while. A trip to Naga meant we would be changing our tree zones and, subsequently, encountering more varieties. For this hike, Panwar brought along a more experienced advisor on mushrooms; former master shepherd, the 61-year- old Chain Singhji. A few Kanel cheuns were spotted and duly plucked as we began to ascend Naga while the forest was still pine. A little later, I saw two pretty, bright yellow bobs coming out of the ground like twins. “Unopened Bamar Thalis,” informed Panwar, “Edible, but leave them be until they ripen.” His polybag was already looking thick. He let me have a peek to see samples of another variety: again white mushrooms, but in shapes resembling half-opened umbrellas. “Tilcheun,” he said. Meanwhile, sage-like, the former master shepherd was sitting cross-legged at a distance observing us. “Don’t take a chance with that,” he said of the Tilcheun. The variety had made him very sick several decades ago. “I must have been 18 then, but I starkly remember…the puking, a fight…a violent night…,” he recounted. Amid the swelling grove of high altitude trees at the top of Naga, we discovered a whole mushroom catalogue that day: “Banjkacheun (Oak cheun), had unknowingly consumed poisonous mushrooms that led to the death of three people. Which mushrooms had they picked…where had they gone wrong? Professor RP Bhatt, Life Sciences Dean at the HNB Garhwal University in Srinagar, has spent a little more than thirty years in trying to clear the Western Himalayan mushroom mystery for us. He will soon be coming out with a book on wild mushrooms with, both, botanical and local names. I ask him if he can identify some of the mushrooms varieties from our Uttarkashi cheun adventure from the pictures. Our Kanel cheun turns out to be a ‘Buranskacheun (Rhododendron cheun), Himrikacheun….” Back in Dehradun, the 1 August Hindi daily carries news of a new mushroom the forest department has identified as “murga mushroom”. I read the report twice but couldn’t find its scientific name. In fact, I started wondering about the botanical names of the cheuns we’d enjoyed in Uttarkashi. Surely, botanists would have been at work alongside traditional and experiential knowledge. How useful a merging of the two knowledge systems would be, I wondered. In the 2 August papers, I encountered grim news: a family in a Tehri village Cantharellus Cibarius, a “choice edible mushroom,” he says. The delectable Pitha Chattri could be an Agaricus of the ‘Lepiota’ species and the botanical name for the pretty yellow Bamarthali in all probability is Amanita Hemibapha, which is quite “edible”. But Dr Bhatt ends on a cautionary note. “The guchhi mushrooms we used to find in abundance in a place like Khirsu in Pauri about ten years ago are now almost gone. Ecological pollution is depleting these precious resources.” Reason enough to have a serious conversation about our wild mushrooms. I’m now waiting for his book to come out.