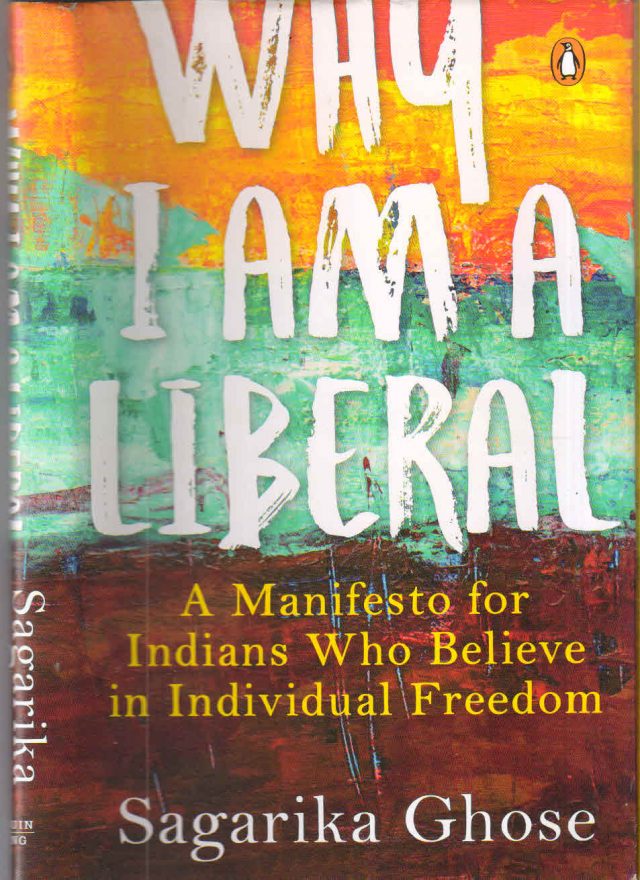 Sagarika Ghose is a well known figure in, both, the electronic as well as print media. She has worked at various times with the Times of India, Outlook and CNN-IBN news channel. Her works include two novels, The Gin Drinkers and Blind Faith, as well as a biography of former Prime Minister Indira Gandhi, titled Indira: India`s Most Powerful Prime Minister.
A liberal, as the Oxford Dictionary defines the word, is one who shows ‘a willingness to respect and accept behavior or opinions that differ from your own; to favour individual liberty’. Ghose in her introduction elucidates the topic comprehensively. Gandhi, she states, was in many ways the most successful liberal politician of all time. Gandhi once said to Jawaharlal Nehru, ‘Resist me when my suggestion does not appeal to your head or heart. I shall not love you less for that resistance.’ Gandhi can justifiably be called the Father of Indian Liberalism apart from the Father of the Nation. The author harks back to the days when the national scene was dominated by stalwarts who not only preached but practiced Liberalism as well. Chakravarti Rajagopalachari was one of the foremost proponents of the Liberal stream of thinking in the early years of independence. The Swatantra Party formed by Rajagopalachari or Rajaji as he was better known was described at the time as being ‘three decades ahead of its times’.
Ghose is no holds barred in her critique of the regime of the NDA under Prime Minister Modi and describes the direct interference in personal and individual freedoms as seen since 2014 is unprecedented after the infamous emergency of 1975-77 was lifted. While discussing the patriotism prescribed by those subscribing to the Sangh Parivaar ideology she mentions that during the freedom movement many stalwarts questioned Gandhiji openly on matters of Congress Policy and his ideas. For example, when the Mahatma called off the Non Cooperation Movement after the Chauri Chaura incident, Netaji Subhas Chandra Bose described it as ‘nothing short of a calamity’. Likewise, C Rajagopalachari opposed the Quit India Movement in 1942 as it was harmful to the country at a time when there was a threat of an invasion. No other national leader of the time questioned the patriotism of Bose or Rajaji. Present day politicos of a certain way of thought may have called them anti-national. Clearly the level of tolerance in India has fallen sharply.
The chapter in the book titled ‘The Liberal Hindu’ is well documented and should be read with focus as it contains a good deal of information that every thinking citizen should apply his mind. To what extent are we to allow religion to forsake rational and logical thinking? Prime Minister Modi stated that Ganesh`s elephant head was the result of plastic surgery and the birth of Karna genetic engineering! Plausibly thinking an elephant`s head is two feet in diameter and a human neck does not exceed eight inches at the very most. How can the two fit? How much longer are we to refer to this as a matter of faith? Ghose questions the jingoism which is currently going on in the name of nationalism and is able to deal with other problems which liberal journalists have challenged like dynastic politics and social injustice. It is also interesting to observe that Vinayak Damodar Savarkar, a poster boy for the Hindutvavadis, was opposed to cow worship and had opined, ‘while worshiping the cow, the entire Hindu nation became docile like the cow’. So much for cow vigilantisms which takes place from time to time sponsored by the right wing Hindu groups! Their icon had contempt for cow worship.
Ghose raises a pertinent question in her book, if the Muslims have been appeased by successive governments as alleged by the Sangh Parivaar, why doesn`t this show significantly in their income and educational level? Although they are no easy answers to these questions, it does indeed give food for thought.
She is equally critical of the ‘soft Hindutva being practiced by the Congress Party in recent times. She points out in a way quite germane to the topic of the book that the restless youth and impulsive middle class hero worship strong dictatorial leaders who try to make themselves indispensible to the nation, like Modi in the present times and earlier Indira Gandhi had done.
On the whole, Sagarika Ghose`s book will please the ‘liberal’ reader, but those subscribing to a certain political ideology will not be too pleased with her views.