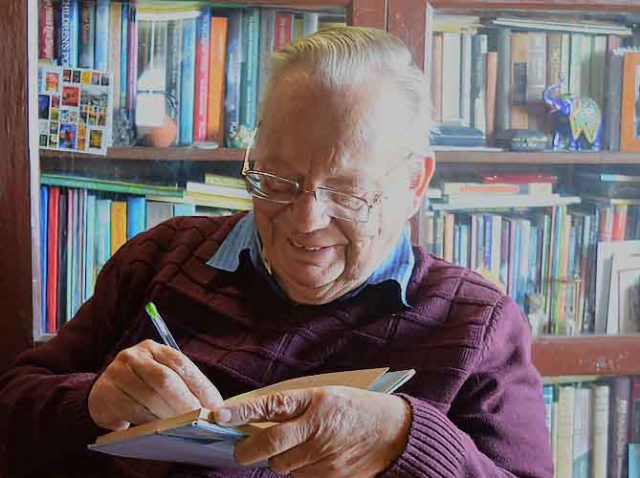 Conversation with Ruskin Bond on his Birthday

For a writer as fastidious as VS Naipaul to feel pleased about another writer must be extremely exacting. But that is what he has done with Ruskin Bond, whose memoir Scenes from a Writer’s Life has deeply moved him. ‘He is writing about solitude, tremendous solitude,’ comments Naipaul as he marvels at Ruskin’s mind and his art. For this unassuming and ebullient writer from the hills of Mussoorie, perhaps this solitude is not enforced.

Author of over 120 books of short stories, novels, poetry, essays, anthologies and books for children, Ruskin Bond has been living in his home, the Ivy Cottage, perched on a Mussoorie hillside with windows opening to the sky, the Doon Valley and the Pari Tibba. He is fascinated with small locales and mountains in particular. The twin cities of Mussoorie and Dehradun have been central to much of his writings and have shaped his creative imagination. Had he been living in the metropolitan cities like Delhi and Mumbai or London, he would still be a great writer but perhaps not the kind of writer that he has become. What strikes his readers most is his warm humanity reflected in his narratives, humorous and profound by turns, and his language has the freshness of a mountain spring, spontaneous and unsullied.

When I visit him at his modest cottage at the far end of the town, I am struck by the warmth and simplicity of the writer who is unaffected by the dazzle of the market driven world. I am reminded of Thoreau, who put it so aptly in Walden: ‘Sell your clothes and keep your thoughts.’ His life and career have followed the refrain, ‘Tramp, tramp, tramp along the highway’, in the words of an old Nelson Eddy song.

This interview took place in 2005 when Ruskin Bond was conferred the D. Litt. (Honoris Causa) by H.N.B. Garhwal University. Subsequently, I interviewed the author over an extended session for a long biographical article I was writing about him. Since the conversation retains its salience, excerpts from it are reproduced here for readers who celebrate as their beloved author turns 86 today:

Ruskin, you had a happy childhood. You have very fond memories of your father. Were you also haunted by a feeling of loneliness, and did you take to books and writing to cope with this loneliness?

Yes, to some extent. Well, the loneliness, I think, became part of my life after my father’s passing. When he died I was ten. Upto then, I don’t think I had experienced any great loneliness because I had him as a companion and, even when I was at school in Shimla, he would often visit me. But after he died there was a gap and it took me some time to adjust to the home life and the social life of my mother and stepfather and certainly did turn to books. And whenever I could find a good book or one that affected me I would beg, borrow or steal it – you can say books played a very large part in my growing years.

Naipaul in one of his recent interviews has singled you out as his favourite from among the contemporary Indian writers and especially praised your book Scenes from a Writer’s Life. He thinks it is a book of solitude. Would you agree with that view?

Yes, but a good deal of my writing deals with solitude as a theme or as a part of my writing. Scenes from a Writer’s Life is a fairly straightforward autobiography. There are parts in it which do deal with the trauma of my childhood and early years but you’ll find the theme of solitude coming in books like Rain in the Mountains or in some of my short stories; even in The Room on the Roof.

Would you tell me how you felt about India while you had been away in the Channel Island, when you were also writing your first novel The Room on the Roof?

Well, even there, I think, I was conscious of the loneliness and solitude because in the Channel Island I didn’t have any close friends, and although I had a job which kept me occupied during the day, in the evenings I was very much thrown on my own resources. I would go for long walks on the seafront and either recall my happier days in India, in Dehradun, or dream of returning, and I think my first novel, The Room on the Roof, grew out of that.

Your characters are usually content to feel life on the surface. They are not interested in the hurly burly of the social life or political life. Is that a conscious choice?

Well, I am an apolitical writer. I don’t really get involved in political ideology or the conflicts that are part of it- but nevertheless I keep myself informed. So, I am not ignorant of political issues. I certainly follow political changes and trends in the country through the printed medium as well as the visual. Yet, I don’t get involved or take sides. You might say I stand aside.

Who are your favourite authors?

I have to say favourites come and go over the years. But the writers who influence you are the ones you grew up on. And I used to read everything by Dickens and writers like Stevenson or John Beckum and later the short story writers. So, I read a good deal of Somerset Maugham and H.E. Bates, William Saroyan and even the classical writers like Chekhov and Maupassant. They were all influential, I would say.

What is your daily regimen of writing?

Well, it used to be stricter than it is now. I used to be quite firm about my doing couple of hours every morning. But now there is such a volume of work behind me that has been published that I take it easy. I’ll write a couple of pages a day. Of course, if two or three days go by and I haven’t written anything, I’ll feel guilty about it. So it is nice to put down something. It’s like keeping a journal. Put down thoughts and some of them will come for use in essays or stories or just in journal form itself, as with say Landour Days or other books of that sort. Also, The Lamp is Lit and Rain in the Mountains have sort of sprung from the journal itself.

Does poetry keep on interesting you?

Oh yes, I wish I could write more poetry. I have always enjoyed it and whenever I have felt like it I have written a poem or two. Of course it is hard to interest publishers in poetry because it is difficult to sell poems but I slip them into my other books from time to time and over the years I must have written certainly two or three hundred poems. I wouldn’t call them great poetry but certainly I enjoyed writing them, and I think that is the important thing.

Well, that is an understatement. Your poetry is superb, and my favourite poem remains ‘Lone Fox Dancing’. That seems to be so much in character. Isn’t that so?

‘Lone Fox Dancing’ is one of the few poems I can toss off because I can remember the words:

As I walked home last night I saw a lone fox dancing In the cold moonlight.

I stood and watched. Then Took the low road, knowing
The night was his by right.

Sometimes, when words ring true, I’m like a lone fox dancing In the morning dew.

(The interviewer is former Professor and Head of the Department of English, HNB Garhwal University)