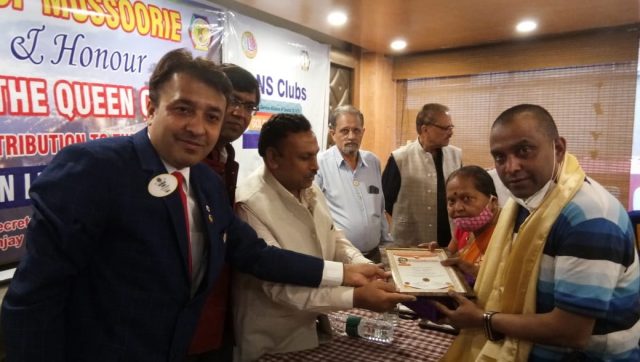 By Sunil Sonker
Mussoorie, 15 Jul: The Corona Warriors working in the front line were felicitated by the Lions Club here today. Chief Guest and Governor of the Lions Club, Gaurav Garg honoured the journalists working in the front line by presenting citations and mementos. He said that, during the Corona period, an important role has been played by the sanitation workers, doctors, health department employees, police and journalists working in the front line. The sanitation workers ensured cleanliness, while the health department worked day and night to save the lives of the people. People were made aware of Covid-19 precautions by the police, while coverage by the journalists alerted people about the pandemic.
He said that journalism is the fourth pillar of democracy, making important contributions to the development of the country, while placing the problems of the people before the government.
Present on the occasion were Mussoorie Lions Club President Dinesh Goyal, Secretary Sanjay Agarwal, Treasurer Rajan Virmani, Manju Agarwal, Smriti Hari, District Treasurer VP Chaudhary, former Governor MPS Khurana and others.