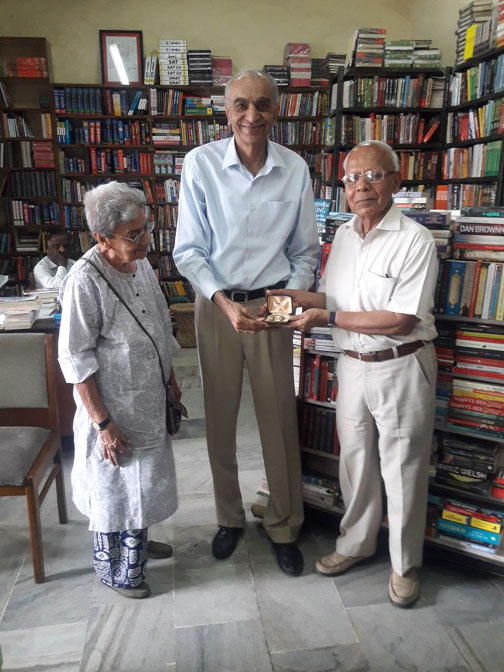 By OUR STAFF REPORTER
Dehradun, 23 Apr: Prithvi Chaudhuri and Ramola Chaudhuri, son and daughter of the renowned author, the late Nirad C Chaudhuri, today, visited Natraj Publishers on Rajpur Road as part of the World Book Day celebrations at the Green Bookshop. They greatly appreciated the choice of books on display and, in appreciation of the efforts made by the bookshop to develop reading culture in the city, they presented a set of cufflinks belonging to their father, Nirad C Chaudhuri to Upendra Arora, owner of the bookshop.
Ramola Chaudhuri later disclosed that these were worn by their father when he received the decoration of ‘Commander of the British Empire’ from Queen Elizabeth. Incidentally, the same set was chosen by Chaudhuri when he went to call on Jacqueline Kennedy, the first lady of the United States, at the Buckingham Palace.
Nirad C Chaudhuri was born on 23 November, 1897, in the East Bengal town of Kishorganj, now in Bangladesh. He lived in Calcutta and Delhi before settling in England in 1970. He began writing his first book Autobiography of an Unknown Indian in 1947, and it was published in England in 1951, and remains in print even today. An instant success, the book is one of the classics of contemporary Indian literature. It provoked a furious debate for its controversial insights into Indian and European history. In 1955, at the age of 57, Chaudhuri first visited England to broadcast a series of talks for the BBC, and this memorable journey prompted him to write The Passage to England. He won the Duff Cooper Memorial Prize for The Continent of Circe. Nirad C Chaudhuri received the Hon. DLit of the Oxford University and the CBE bestowed by the Queen of England. He lived in Oxford, England till his death in 1999.

Garhwal Post has established itself as a credible, balanced and forward looking newspaper in India. Based in Uttarakhand, the daily is read by the aware, socially and culturally responsible, high-income elite of society.
Contact us: info@garhwalpost.in
best churches for singles near me