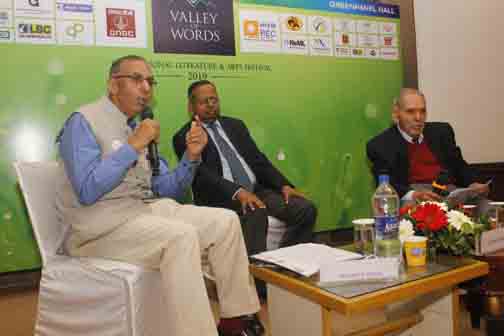 DEHRADUN, 15 Nov: A lively discussion was held this afternoon on the biography of the former Prime Minister, Morarji Desai, at the Valley of Words International Literature & Arts Festival. The author of the book, “Morarji Desai: A Profile in Courage”, Arvindar Singh was in conversation with veteran journalist Raj Kanwar. N Ravi Shanker, a former Chief Secretary of Uttarakhand, chaired the session. The 44th Amendment to the Constitution brought by the Janata Government had the indelible stamp of Morarji Desai, Arvindar said, in a reply to a question. It made the type of Emergency promulgated in June 1975 difficult if not virtually impossible to be repeated. N Ravi Shanker recalled that, when Morarji was detained at a Rest House in Haryana during the Emergency, he declined to meet a close associate of his since he was not on the list of approved visitors. He was a great believer in adhering to rules. Singh was asked by Raj Kanwar why he considered the late Prime Minister an administrator par excellence. He replied that, both, at the Provincial and Central level of government, Desai was able to give a fair dispensation to the people. He inducted technocrats into the government at the Secretary level. He handled the economy well and ensured good relations with all the neighbours, including Pakistan. He was the only Indian to be awarded the Nishan-e- Pakistan, Pakistan`s highest civilian award, he added. About the allegations of being a CIA Agent, he said it was probably another person with the same name (MJ Desai) and Morarji was unduly blamed for it.